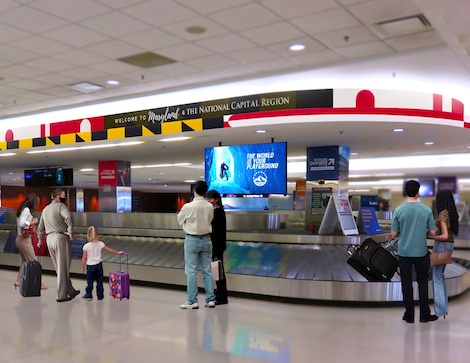 Ricky Smith, Executive Director of BWI Marshall Airport said ““We look forward to working with Clear Channel Airports to present a dynamic, creative media program that will engage our travelers. With this initiative, regional brands will have the opportunity to stand out and reach passengers in our unique, world-class airport environment.”

With 68 major companies across a variety of emerging sectors including healthcare, financial services and cybersecurity, in addition to federal government agencies headquartered in the area, the airport is a strategic platform for global and local brands to reach its diverse passenger base. Both business and leisure travelers frequently use the airport hub, labeled among the nation’s ‘Top 10 Airports’ by Conde Nast, making it a highly competitive advertising network for both B2B and B2C brands. In August, the airport reported it had experienced its highest 4-day passenger traffic since mid-March, a 50% increase since travel restrictions were implemented due to COVID-19. And just weeks ago, TSA agents screened more than 984,000 people at checkpoints across the country – which is the most since April.

Morten Gotterup, President, Clear Channel Airports told us “As our country continues to reopen, we expect activity at Baltimore/Washington International Thurgood Marshall Airport to continue to pick up more quickly than other regions since it’s a hub to so many businesses, universities and government entities. These are still very challenging times for the travel business but we’re proud of the new partnership we have with Maryland Aviation Administration the operator of BWI Marshall and are very much looking forward to working closely with their team as a partner so we can develop innovative, interactive and educational advertising experiences for their passenger base.”

Clear Channel Airports is already the premier display advertising provider for Washington Dulles International (IAD) and Ronald Reagan Washington National (DCA) having won those contracts over incumbent JCDecaux in 2015. The new BWI contract, also previously held by JCDecaux, further augments Clear Channel Outdoor’s position as the leading out of home media provider in the Baltimore and Washington, D.C. metropolitan areas as the company’s roadside displays reach over 80 percent of the Washington D.C. market and 99 percent of Baltimore region weekly.

Baltimore is about 40 miles northeast of Washington, D.C., making it a principal city in the Washington-Baltimore region. The city is home to numerous institutions of higher learning, including 12 accredited two-year or four-year colleges and universities. Baltimore’s metropolitan area was estimated to be just under 3 million, making it the 21st largest metro area in the country.

The new advertising network at BWI will include: