Content – in the right context – definitely is king at the Independent Coffee Network [1] (ICN), recently launched in Los Angeles and with New York as its next sight. The reason is simple: It’s run by executives who know content when they see it.

David Shikiar, CEO, has spent more than 20 years as the senior executive handling program production for major U.S. television networks and specialty channels. His partner Shawn Sanbar is the founder and owner of Atlas Digital [2], a post-production firms serving the Hollywood film industry. And creative director Justin Holt works closely with all the artists and musicians who are the content partners. 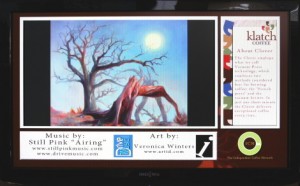 So the independent coffee shops with 37” or 40” screens running content from ICN are benefitting from the experience and choices of people who really know art, artists and musicians and whose works are chosen specifically to fit the coffee house customers – and geared to the time of day that they patronize the indie coffee establishments.

“ICN really spun out from the long-established post-production house, and we have the benefit of using its staff as needed,” says Shikiar. “”We offer content that’s really eye candy for the viewer.”

That content comes from numerous partners such as Deviant Art [3], BFM [4], the Rock & Roll Gallery of Richard Aaron [5], boxurshorts [6], and about 10 others including the newest partner, the U.K.-based Aardvark Records [7].

ICN also has integrated live Twitter [8] – “a great marketing store fun tool for viewers,” says Shikiar. Using their mobile, viewers can see their Tweet up on the screen immediately. 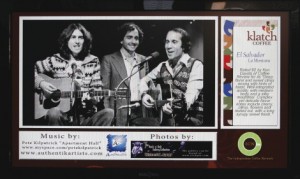 While content is customized for the coffee outlets – and screens do also carry news, sports scores, and advertising – that content is controlled from a central source. However, the local store manager has the ability to add in local promotions. And ICN also offers the opportunity for sponsorship of its content.

“For example, iTunes would be a great sponsor for longer term acoustic segments,” says Shikiar.

And while a lot of coffee shops play music illegally (until they get caught) from an iPod or other device rather than pay royalties through ASCAP [9] or BMI [10], Independent Coffee Network does all the licence deals and pays the BMI performance royalties for everything played on ICN screens. The company owns its screens and also has its own advertising sales force.

Admittedly, it’s not yet big. It has six stores in the Los Angeles area with another 10 to 15 coming down the pipe shortly, and plans for New York as its second market. However, two European companies, including a 300-store chain, have already shown interest. And, reminded that Starbucks is opening its own chain of unbranded ‘independent’ coffee shops, Shikiar admitted to an interest in going after them.

World Wide Arts [1] is the holding company for ICN. This will allow World Wide Arts to engage other content driven brands for hotels in the future, as well as larger coffee franchises that wouldn’t want to be lumped into indies, but still want the indie feel with their own brand on it.