In Africa, not just South Africa, Winnie Madikizela-Mandela [1] is universally recognised as the First lady of the Continent. Winnie is also an MP and is used by the government as an ambassador with particular attention being given to improving the plight of children across Africa. 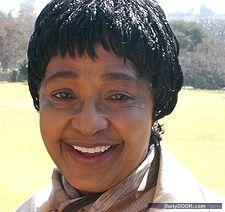 [2]We start this post off with this background information as many in Europe would probably think it a little strange that anyone, let alone a digital screen network, would engage with Winnie Mandela. Winnie is probably more well known in the UK for example as the woman who ran Mandela United and went to jail for fraud.

However, when Winnie speaks then everyone in Africa listens so it’s actually incredibly big news that she is set to support The Life Channel [3] in RSA.

Mrs Madikizela-Mandela told us “I am delighted to join the board of Life Channel Communications, which provides a fantastic means of communication, to educate children and other people in need, on all health matters including HIV/AIDS and much more. Having examined the effects of the Gauteng Life Channel pilot it is clear to me that the people, and in particular children of Africa, will benefit massively from the presence of the channel as it expands across healthcare and schools. Aside from creating awareness of social and health issues, the channel will also provide broadband internet access to every school and health facility across the country”

We told you at the tail end of June that Life Channel [4] was looking at growing quickly in South Africa – they have already been contracted to install a broadband communications network into over 400 healthcare facilities across Gauteng Province.

Life Channel Communications provides a broadband satellite network which will provide a Wide Area Network for the new Health Information System. Together with its UK partner, The Life Channel Ltd, which is part of the CAN Media Group, the broadband satellite network in South Africa will enable The Life Channel’s high-quality health and education TV channel to be extended to South Africa and the entire African Content.

A good move, a bold move (sounds also like a ‘noble’ move) but not unexpected from one of the companies, CAN Media, we told you to watch in 2009 [5].