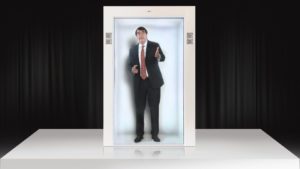 [1]David Nussbaum, the founder of PORTL Hologram turned the excitement generated by hologram performance given posthumously by Tupac Shakur at the 2012 Coachella Valley Music & Arts festival into a business.

According to David, the PORTL is a significant upgrade to that, and the Pepper’s Ghost technique that stage illusionists and moviemakers have been using since it was invented by John Pepper back in the 19th century

The PORTL projector can transmit images any time of the day or night, and using PORTL’s capture studio-in-a-box means that anyone with USD 60,000 to spend and a white background can ‘beam’ themselves into any portal anywhere in the world.

The company claims to have sold a hundred devices already and says it has delivered several dozen to shopping malls, airports and movie theatre lobbies.

We are told that [art of the selling point is its interactivity, through the studio rig and PORTL hardware, users can hear what people standing around the PORTL are saying and then respond.

PORTL is looking to build a miniaturissed version of its system that would be about the size of a desktop computer and could be used to both record and distribute the holograms to anyone with a PORTL device.

David Nussbaum said “The minis will have all of the features to capture your content and rotoscope you out of our background and have the studio effects that is important in displaying your realistic volumetric like effect and they will beam you to any other device. To build out the business, the PORTL minis will have more than just communications capabilities, but recorded entertainment as well. The minis will be bundled with content like Peloton and Mirror bundled with very specific types of content. We are in conversations with a number of extremely well-known content creators where we would bundle a portal but will also have dedicated and exclusive content… [and] bundle that for $39 to $49 per month”.

If you think this all sounds a little far-fetched you are probably not alone.

Doug Barry is also coming on board as the company’s first chief operating officer.