JCDecaux NZ Country Head Mike Watkins and oOh!media NZ General Manager Nick Vile today announced that they have entered into an arrangement where the JCDecaux developed Out of Home audience measurement and planning platform, Calibre, will be jointly owned by both parties, in a funding model similar to Australia and other global industry measurement systems. 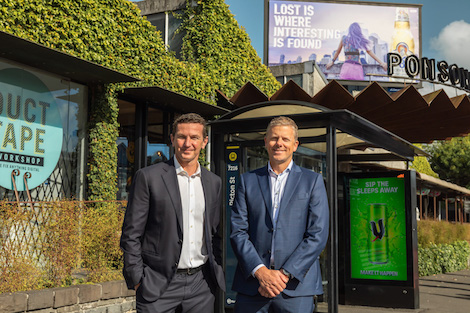 This makes perfect sense, in that leading businesses would collaborate to achieve a common audience currency. I am not familiar in a granular sense with the Calibre methodology, although I believe that it is very well respected in New Zealand.

Mike Watkins told us “Calibre has been promoted as the potential industry standard as it is the most appropriate, accurate and up to date data science platform for New Zealand, taking into consideration the dynamic of our urban and provincial population distribution. Also, the platform is both future proofed and has capacity for further development. This move solidifies Calibre as the industry currency measurement tool and the platform to unify the industry. We are delighted that oOh!media has chosen to invest in Calibre and that there has been a great amount of collaboration both within the industry and among Out of Home suppliers to make Calibre the success it is. We look forward to working together to grow the Out of Home industry”.

The move will cement Calibre’s position as the industry-wide audience measurement solution and pave the way for further enhancements in the future.

Calibre was created by JCDecaux in 2017 to provide the industry with a robust Out of Home planning and measurement tool, delivering unprecedented transparency and accountability for advertisers’ campaigns. Since its inception, JCDecaux’s goal for the platform was for it to become the currency for industry wide Out of Home audience measurement.

The sale of 50% of Calibre has achieved just that, with the platform now endorsed by New Zealand’s Out of Home Media Association Aotearoa (OOHMAA) as the singular Out of Home audience measurement platform. JCDecaux and oOh!media are also working with a number of new members who are planning to join Calibre.

oOh!media New Zealand General Manager, Nick Vile, told us “The industry has been on an audience measurement journey for some time, with many options considered either at a sector level or as proprietary tools. The consistent feedback we have received from the market is that standardisation of audience metrics for the sector is critical to our continued success. Calibre emerged as the key candidate for a sector unifying tool because of the robustness of the data inputs and supporting methodologies. Drawing on multiple data sources, it is truly holistic in its view of how people move around our country’s metropolitan areas. We are pleased to now be on this journey with JCDecaux, and along with other OOHMAA members see this development as the stepping stone to true unification and long-lasting benefits for our industry”.

The continued enhancement of Calibre is a priority for JCDecaux, oOh!media and all OOHMAA members, who are being engaged on development plans. The companies are collectively collaborating with developers, Reach Media, to deliver a comprehensive two-year road map for Calibre’s ongoing development, including how Calibre will deliver audience standardisation for programmatic platforms with the intent that this road map will be shared with the market in the coming months.

The latest Calibre development delivers the ability to calculate net reach at the geographic level appropriate to the campaign, whether it be at a local, metropolitan or regional level. For example, if a campaign contains multiple sites within a metropolitan area, a metropolitan reach percentage will be presented, whereas if an individual site in a small town is selected, a local reach percentage will be displayed. The main benefit of this feature is that it increases the relevance and granularity of audience reporting.