There is, it seems, or has been, a ‘long awaited return’ of Animaniacs, which is now streaming on Hulu. To promote this occasion someone figured that a holographic activation, projected atop a very small number of taxi and rideshare vehicles, featuring the show’s characters in iconic locations across Los Angeles and New York was a good idea. 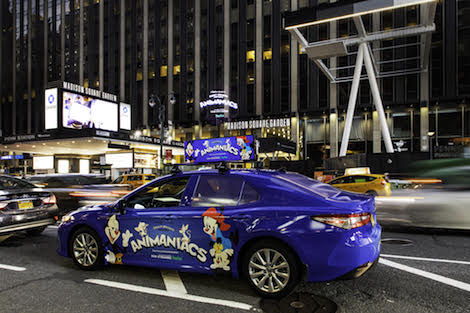 So, this past weekend, Firefly [2] outfitted its proprietary smart media displays with hologram projectors to place the Warner siblings, Yakko and Wakko, and the Warner sister Dot in iconic locations across Los Angeles and New York.

The three-dimensional, holographic characters could be found atop some of Firefly’s taxi and rideshare vehicles in New York at Madison Square Garden, Times Square, the Museum of Modern Art, and Rockefeller Center, and in Los Angeles at Santa Monica Pier, The Grove, Sunset Strip, and TCL Chinese Theater.

Note that these holograms only worked when the vehicle was at a stand-still.

Kaan Gunay, CEO and Cofounder of Firefly said “Brands deserve more from out-of-home advertising — static, traditional creative simply isn’t enough to resonate with a modern audience. At Firefly, we reimagine the physical world for consumers, with captivating campaigns that meet them where they live, work and play. We’re thrilled to honor the reboot in an all-new, unforgettable way, with a campaign that would never be possible with traditional methods of advertising. We couldn’t think of a better way to honor the characters and world of Animaniacs.”