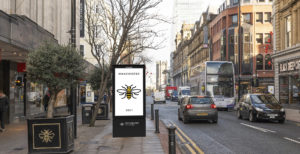 Councillor Nigel Murphy, Deputy Leader of Manchester City Council, said “We welcome the appointment of JCDecaux as one of the city’s media partners following a competitive process and some extremely high-quality bids. We look forward to working with them to bring modern infrastructure and new digital screens to Manchester city centre. JCDecaux has a long history of working in Manchester and has shown a strong understanding of our vision, with a desire to support our work across a range of environmental and social impact projects – including our commitment to becoming a zero-carbon city by 2038.”

Manchester (population: more than 550,000) represents the largest UK city region economy outside London. It has an outstanding reputation as a centre of excellence for business and retail, and is also renowned for its digital and IT, financial sectors and universities. Manchester was voted “the most liveable city in the UK (source: The Economist, 2019).

JCDecaux will develop, maintain and sell the digital Out-of-Home advertising space on 86 CIPs (172 digital screens), with installation set to begin in the second half of 2021. Locations will include Piccadilly, Deansgate, Market Street, King Street, Portland Street and the Northern Quarter.

Jean-François Decaux, Co-Chief Executive Officer of JCDecaux, was quoted as saying “JCDecaux is very proud to have been awarded this important contract by Manchester City Council and we are excited to continue this important relationship that began over 22 years ago. We look forward to developing our partnership further through this best-in-class new digital street furniture that will support vital community and environmental initiatives in Manchester. This contract underlines the power of the public screen to enhance life in cities. The Community Information Panels will enable Manchester City Council to meet their sustainability and communication goals and provide an outstanding media channel for national and local brands in this dynamic and future-facing city.”

Each CIP will carry a blend of commercial advertising and public service messaging across two state-of-the-art 86” digital screens. Designed for Manchester, the CIPs will feature the logos of Manchester City Council and the iconic Manchester bee and will be powered by renewable energy and maintained by technicians driving electric vehicles, limiting any carbon emissions.

JCDecaux will provide a community fund to support key social impact initiatives in the city. For every CIP installed, JCDecaux will plant five new trees, working with Manchester City of Trees. The community fund will support the Greater Manchester Mayor’s Charity, ‘A bed every night’ initiative to help end the need for rough sleeping. JCDecaux has pledged to provide a range of apprenticeships and work placements in Manchester to help students, and the unemployed.

This entry was posted on Monday, November 23rd, 2020 at 19:14 @843 and is filed under DailyDOOH Update. You can follow any responses to this entry through the RSS 2.0 feed. You can leave a response, or trackback from your own site.