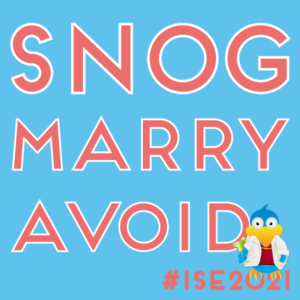 If he was listening, he got an earful of comments from more 62 listeners and on-screen industry executives on what they know – or don’t know – about this year’s show; whether it should proceed as scheduled under its current format or otherwise; what their company’s plans are and why they would have difficulty exhibiting and attending; their plans regarding InfoComm 2021 (like ISE, also an AVIXA-CEDIA joint venture) scheduled for October; the difficulties with travelling to events in this #Covid19 pandemic; and more.

With almost all industry-related events cancelled and/or postponed in the first six months of 2021, ISE is still scheduled.  Blackman is expected to announce any changes, further postponement, or cancellation plans for #ISE2021 by March 1, 2021. If last Thursday’s online participants were any indication, it seems doubtful at this stage that it will take place at all, or in any form that regular attendees would recognise.

Money talks obviously, and ISE brings in big bucks for its owners. One anonymous caller claimed that AVIXA needs both ISE and InfoComm to happen because 80% of its revenue is tied up in these shows. They warned, in the worst case scenario that there could be no more AVIXA or AV industry association if we weren’t careful – we think this unlikely but in August 2020, AVIXA was forced to lay off 40% of its employees and it is a fact that by the time #InfoComm21 takes place in Orlando, FL. in October, it will be some two years and four months since AVIXA last held a large trade show, Ed. 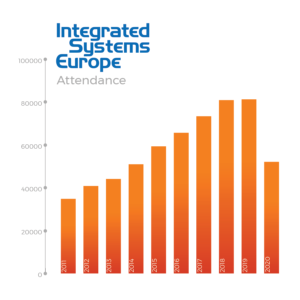 Last week was ISE’s 17th anniversary, the event first took place in Geneva, Switzerland in 2004. It soon found a permanent home in Amsterdam where Mike Blackman did a fantastic job and grew the event to, at its height, have more than 81,000 multinational visitors. In July 2018 it was announced that ISE would move to Barcelona to accommodate its growth. February of this year should have been the events first in its new home.

Early last year #COVID19 raised its raised its ugly head but #ISE2020 did manage to go ahead, dodging a rather large bullet, and in fact was probably the last large trade show to take place that year. Mobile World Congress, due to take place in March was cancelled within a few weeks of ISE finishing.

On the money side, there seemed to be some question about the Euros already paid by exhibitors if the event does get cancelled. One anonymous caller said that exhibitors have been chased for their final payment and threatened with loss of deposit if not paid.

“It seems a bit harsh in the current climate,” he said.

Another exhibitor said that her company had already paid for 75% of its floor space and is liable for 100% if it cancels, while another caller said that it’s the exhibitors’ choice whether the money is refunded or put on deposit for the 2022 show in case the 2021 show gets cancelled.

“The organizers have a social responsibility to postpone the event until 2022 and not penalize the exhibitors,” said Jason Shave, Virtual Collaboration & Classrooms for Edtech and Unified communications.

Nothing is clear, but money always talks. In fact, Jeffry Pettinga, sales director Europe. iiyama international, thinks that ISE would prefer that the government or local authorities cancel the show, likely for insurance purposes.

Several anonymous listeners made mention that ISE had completely removed one hall from the show. Others pointed out that the online floor planning tool was no longer available while the organisers tried to move everything around to cater for a shrinking show.

“If you are a 2021 exhibitor, you do not even know where your booth will be located. It’s terrible that no one can get access,” said one.

“Agreed,” said Pettinga. “At least InfoComm has been transparent with its floor plan and the reduction by some major exhibitors.”

Stoddart also expressed the need for exhibitors to not only know where their booth is located, but what others are surrounding it.

“I guess many exhibitors have reduced their space or cancelled,” said one anonymous exhibitor. “Deadline for this was Feb. 1, so the new floor plan is probably still under consideration. Halls need to be reorganized or cancelled. I reduced my stand by 30% and am actually waiting for confirmation of the hall and position, or alternative suggestions.”

March 1 seems too late for many exhibitors or potential exhibitors to even plan their booths. Some said that they take as long as nine months to plan for trade shows and their stands.

“We usually take five months to arrange for a trade show,” said Senra. “This not only means a booth design. It means a team of 11 or 12, working on communications, hotels, traveling arrangements and manning the booth.”

Industry execs are obviously also worried about whether investing in the event will actually be worth it. With travel restrictions still in place all over Europe, if the event does go ahead, attendance will be seriously down on previous years and with many industries on the edge of recession it is surely unlikely that many corporate ‘end-users’ will want to, or even be given permission to attend.

“Even if ISE goes ahead, how can exhibitors expect staff to man exhibits and feel safe?” asked Liam Frater, operations director, BDS Digital.

“Can you in good conscience ask people to man your booth?” added Tom Milner, with other callers saying, “We’ll only let people go if they want to go,” and “We’d ask people to volunteer to man our booth.”

If ISE goes ahead, even with a smaller attendance there will be queues for many of the exhibition stands, organiser rules are limiting the safe number of people allowed on any one stand at a time.

“Totally unworkable,” said Stoddart. Another caller mentioned that it was also impossible for a visitor and exhibitor to have a good conversation separated by Plexiglas.

David Da Costa said that last year he had asked Blackman what kind of safety measures were being put in place for ISE and was told that organisers would follow those of the local government and the World Health Organization.

One positive comment came from Mohamed Ghalayini, general manager, media meau llc. “I think that 60% of humans should have received a sort of vaccine and that should make everyone feel at ease to travel”.

Whether an exhibitor or an attendee has had the vaccine, travel restrictions will make attendance difficult. For many Americans, it will mean they must fly to a major European city, and then take another flight to Barcelona – and that’s if they are able or allowed to leave their own country at all. In addition, many airlines have cancelled flights. And travel restrictions will apply, both into Barcelona and when they get back home there may still be the need for quarantine.

With so many borders being closed, there was even talk of approximately 15,000 Spaniards being the only attendees.

While it was obvious that ISE had outgrown Amsterdam – despite the fondness of its familiarity by long time exhibitors and attendees – is the size of the Barcelona venue even needed now?

The possibility of ISE becoming a virtual event was raised and rejected by almost everyone online.

“The reality is that you can always skip a virtual event” said one anonymous caller. “When you are at a tradeshow, you’re at a tradeshow and there’s no escape. You just get done what you planned to go and do. Virtual events are interesting as an add to a physical tradeshow, but they can’t exist on their own.”

One caller said, “ISE simply doesn’t translate to being virtual.” And Bob Kronman, director, Kronman Assocaites, wondered whether ISE and InfoComm should run in alternate years.

“While we can see products virtually, we want to touch and feel them,” said Stoddart.

Discussions veered off to what makes a good virtual show, with one comment being that a good virtual event will have one really strong, interesting speaker and then allow attendees to choose what products or other part of the show they’d like, rather than having them sit through an entire conference agenda.

Chris Neto pointed that year after year, InfoComm is particularly successful because of its strong educational component.

But that’s not the only interest. ISE, in fact, any trade show, is the place to network, to meet potential customers, to finalize deals, to reconnect and catch up with old friends, and to socialize both at the event and at nearby locales. It’s ultimately the place to network.

“It’s the networking,” said Tom Milner “I like to go to the show and network the hell out of it.”

Jason Ward has attended all but two ISE shows since it’s founding. For him, it’s been the preferred place to see and touch new products, but this year feels it won’t be worth the time and money.

Many listeners thought that the organisers were being slightly disingenuous with what’s going on. Several were even prepared to say that “Any trust that was there is being lost.”

Adrian Cotterill wrapped up the call after 90 minutes by saying “With over two million people dead in the last 12 months and the non-known risks of super-spreader events, you have to ask yourself if there is actually a moral and ethical imperative for the organisers to cancel?”

The bets are that ISE will be turned into a virtual event. Something we will know on or before March 1, 2021. Watch this space.

This entry was posted on Monday, February 15th, 2021 at 13:02 @585 and is filed under Scuttlebut. You can follow any responses to this entry through the RSS 2.0 feed. You can leave a response, or trackback from your own site.