The big brands in the UK seem to be falling at Simon Sugar’s feet, whether that is because they are giving away their product cheap (or free as some critics keep telling us) or as we say it is a case of “star-struck corporate employees not choosing the best option available in the marketplace” here we see a deal done with HMV for their hmvticket operations.

Let’s remind readers that back in February 2009 in our post ‘Amscreen On Their Way To 20,000 Screens‘ we said “their low-cost approach to the market means, by OUR ESTIMATES that these guys could have as many as 20,000 screens in the UK by the end of 2009” and although a lot of the announcements from Amscreen recently have been pilots or trial installs, we still think there is a good chance that they will hit this number this year (which makes them a ‘big player’ in the market whether we like it or not). 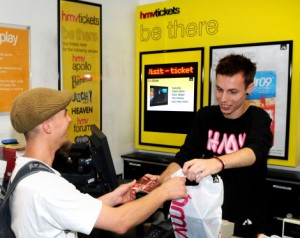 The announcement yesterday was that Amscreen had been appointed by music and entertainment specialist HMV as its digital signage partner for its hmvtickets ticketing operation (you can see a video of this operation here and adds an initial 27 stores across the UK, including the retailer’s London flagship at 150 Oxford Street to their deployed base with a future nationwide roll-out across the chain to follow.

Simon Sugar, CEO at Amscreen told us “We’re delighted to announce this deal with HMV and believe our close-proximity signage is the perfect vehicle for hmvtickets as it utilises the very best in scalable and practical solutions. We look forward to working with HMV on rolling out the network UK-wide.”

The screens we are told will carry information on upcoming concerts, gigs, festivals and events and will advertise ticket availability. In addition, the units will publicise up-to-date news on availability of tickets and also listings for Mean Fiddler Group venues.

HMV will own and run the new network, with Amscreen creating and managing the software platform for the system, as well as providing full customer support.

Dominic Myers, Group Strategic Director of HMV said: “We are very pleased to be working with Amscreen on the formation of a digital screen network in our stores. Amscreen’s ‘plug and play’ technology will enable us communicate our ticketing and live music offer to our customers whilst also meeting our operational requirements.”

HMV’s entry into music and entertainment ticketing follows the announcement earlier this year of its joint venture with the MAMA group, forming the Mean Fiddler Group, to own and operate eleven music venues around the UK, including the renamed hmv Hammersmith Apollo and hmv Forum in London and the hmv Picturehouse In Edinburgh.

This entry was posted on Tuesday, August 11th, 2009 at 10:19 @471 and is filed under DailyDOOH Update. You can follow any responses to this entry through the RSS 2.0 feed. You can leave a response, or trackback from your own site.