Clear Channel’s Living Roofs, affectionally nicknamed ‘Bee Bus Stops’, are planted with a mix of wildflowers and Sedum plants; a favourite amongst pollinating insects, whose numbers have sadly been in decline in recent years. 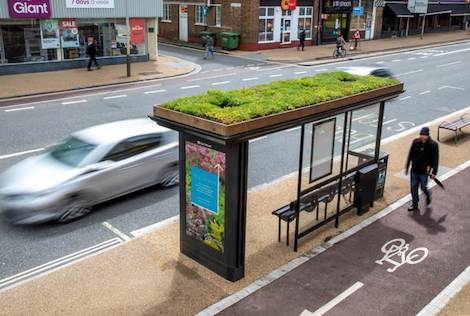 Clear Channel’s Managing Director Will Ramage told us “Leicester City Council has made a huge and decisive step to install environmentally-conscious bus shelters across the entire city. They’ve shown themselves as a leader in reshaping the UK’s streets for the benefit of the environment and the public. We know that true change comes when we start to roll out these types of innovation at scale. We’d love to see the Living Roofs in every town and city across the UK and Europe, having a tangible and positive effect on our planet.”

This citywide network of Living Roof and solar-powered shelters will be a first for any UK city and is just one of the many steps being taken by Leicester City Council to respond to the climate emergency.

As well as supporting Leicester’s bee population, the thoughtfully-designed shelters will positively contribute towards biodiversity and climate resilience, absorb rainwater falling on the roof, help to reduce the ‘Urban Heat Island Effect’, capture particulates from the air, and help make the city a greener and happier place. 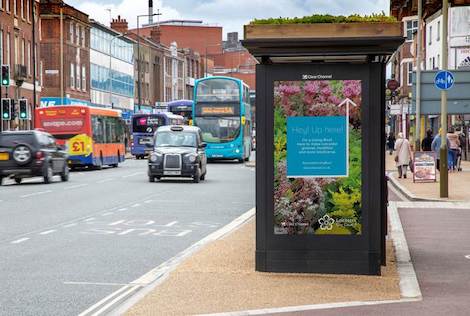 Work to install and plant up all 30 living shelters is due to be complete this summer. When finished, residents and visitors to the city will find half a dozen of the Living Roofs congregated on Humberstone Gate and several along the length of Charles Street, along with the remainder on major roads across the city centre.

Where feasible, all other bus shelters will be fitted with solar panels, powering smart lighting to manage energy use. The self-contained solar technology will make installation of the new shelters quicker and reduce disruption for bus users.

The Living Roofs come as part of a new 10-year contract between Leicester City Council and leading Out of Home advertising and infrastructure company Clear Channel UK. As part of this new contract, Clear Channel are making a multi-million-pound investment into overhauling all 479 bus shelters in Leicester with eco-friendly alternatives, at no cost to the city council.

Leicester Deputy City Mayor Cllr Adam Clarke, who leads on environment and transportation, said: “It’s great to see the first of Leicester’s new living roof bus shelters appearing across the city. We’ve already had some fantastic feedback from people who are as excited as we are to see this bee and butterfly friendly revamp of bus shelters taking shape. But this is just one of many benefits of the citywide revamp of our bus shelters. The new, modern shelters will be great for passengers and the mix of solar power and living roofs is another step forward for our ambition to be a carbon neutral and climate-adapted city by 2030. The new shelters will also be a perfect complement to our work to deliver a new, carbon neutral bus station at St Margaret’s.”

In Utrecht, in the Netherlands, Bee Bus Stops have already been installed, playing a key part in supporting the national ‘Bed & Breakfast for Bees’ Pollinator Strategy. Concerted efforts to look after bees has paid off, with the 2021 National Bee Census reporting that numbers remain steady in Dutch cities.

Work to revamp and replace all Leicester’s bus shelters is due to be complete by late 2022. Clear Channel will be working with partners to ensure that all material from the old shelters is recycled, upcycled, or otherwise avoids landfill.