In the middle of June a new branch office of the Czech Post using digital technology was opened in the Prague shopping centre ‘Eden’. The branch adheres to the concept ‘The Branch of the Future’ and was built in compliance with the most up-to-date global trends. 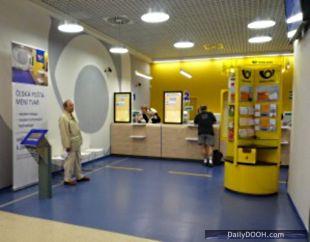 The LCD displays at the counters are used as a flexible communication tool controlled by the counter staff from the touch screen of an IP phone. In addition to the standard content of the screen, consisting of the photograph and the name of the staff member behind the counter and the digital customer call system, the screen may also be used for further information needed by the client and for marketing communications.

A large LCD display, visible from all corners of the branch office, informs about postal products, services and recent developments. The bottom text line of the display shows information taken over from ČT 24 TV channel. The screen audio signal uses the AudioSpotlight technology, and thus the customer sitting on chairs and waiting may listen to the news and current information without the staff working behind the counters being disturbed by the sound.

I had a chance to ask a couple of questions about the new branch office of the Czech Post in an interview with Mr. Petr Dobrý of brand marketing department.

What was the primary impulse for establishment of the modern branch office of the Czech Post? Did you take inspiration abroad, for example?

The first impulse came directly from the customers, who required open counters and direct contact with the staff, and was followed by the requirement for a better work environment for the staff. All this was supported by the idea of a unified modern appearance to serve for the purpose of improvement of the company image. 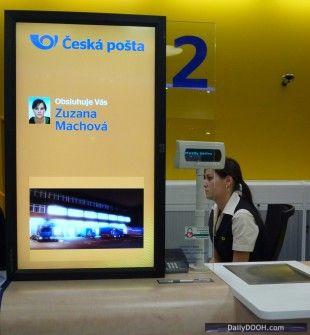 We did look for examples internationally and created a benchmark before the work commenced. We personally visited for example the Slovak Republic, where open counters are already in operation.

What is the expected purpose of the new digital communication at the branch? What do you expect from its deployment?

Better information for the customers, followed by quicker satisfaction of their requirements.

Your company is the first company in your field in the Czech Republic using the directed sound technology Audiospotlight®. How did you decide to make use of this technology?

We believe that a combination of image and sound is more effective than just an image without sound, for two senses and involved in the perception instead of one.

Do you plan selling advertising time of the audiovisual screen?

We will see. First of all we need to build the business case and then we may decide on its basis.

The Czech Post periodical informs that the new branch shows the direction in which your company plans to continue in future. Do you plan opening more such branches in near future?

This post office is a pilot one and more will follow. But please do not expect a rocket start, for the new branch first needs to be tested and then the next branches need to be selected for the remodelling. 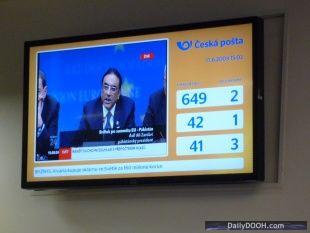 Will you assess effectiveness of digital communication at the new branch office in “Eden”?

Digital communication at the Eden branch is mostly image-based, we may measure the reach on the basis of the number of visitors to the branch and increased sales of the communicated services.

Have you already collected the first reactions of your staff or your clients on the new branch?

Yes, we have already received the first positive reactions of our employees and our clients.

Is the pilot branch post office a “model” for the next implementations or will you design installation of Digital Signage individually for every branch?

My answer to this question will be a little Salomon-like. Of course the pilot branch is a “model”, but we will also proceed with regard to the individual needs of the other branches.

What in your opinion is the greatest asset of the new technology for Czech Post offices?

I will first answer as the post office customer: I can see the asset in the fact that this is another place where I will not be disturbed when I will not want to. If I passively wait for my turn and I do not need to concentrate on my next communication, I can (this is primarily male art) perceive other information flows, which might help me or attract me.

And now I will answer as the post office staff member, who works in a similar branch office before Christmas – I will not be disturbed and after a time woken up from my night sleep with the never-ending Christmas carols.

Do you want to say something as a conclusion?

Apart from the new branch office we have introduced the unified visual style to our web site, all publicity campaigns and printed promotional materials.