Technology and media giant AT&T has built a new downtown Dallas destination venue known as the AT&T Discovery District. The four-block development, “where tech, culture and entertainment combine to create unique experiences” according to The District’s website, includes a network of indoor and outdoor digital display and lighting assets that can be synchronized to create multi-sensory experiences. 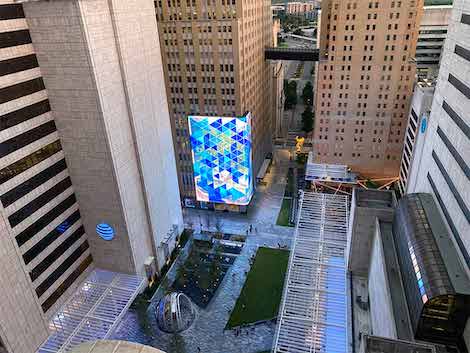 SNA Displays was selected to provide more than 12,000 square feet of digital canvas for the massive development. In total, SNA Displays manufactured, supplied, and installed more than a dozen LED video displays and 100 million pixels for the city’s new landmark destination.

Global design and architecture firm Gensler provided design, architectural, and project management services for all aspects and phases of the project. Gensler worked closely with AT&T to carefully curate and manage a diverse and world-class lineup of digital artists to produce unique content featured across all LED video displays, in addition to designing and producing various content capsules themselves.

High-end LED display technology was installed in three key locations within The District: The Plaza at AT&T Discovery District, the AT&T Experience Store, and the AT&T Headquarters Lobby. All displays are part of a digital network of seamlessly integrated media elements that enable immersive take-over moments of lighting, audio, and creative video content, made possible by an intricate content and platform management system engineered and implemented by Moment Factory.

The Plaza at the AT&T Discovery District has an open lawn for the community, water features, the iconic Golden Boy statue, twin media trellises with kinetic color-changing LED lighting and premium audio, and The Globe, a 3D LED light sculpture that represents the AT&T brand.

The focal point of The Plaza is The Media Wall at AT&T Discovery District, a massive 104-foot-tall, 8,700-square-foot exterior LED screen from SNA Displays that wraps around the high-rise at the corner of Akard and Jackson streets. The LED spectacular was built from SNA Displays’ EMPIRE Exterior line of display products and features a 6.67 mm pixel pitch, meaning the screen includes more than 18 million pixels. SNA Displays supported the AT&T team during city planning meetings and helped with technical details during the permitting process. The Media Wall, which is mounted on the building façade just above the entrance to the AT&T Experience Store, is 84′ wide and curves around the building with an extremely tight 5’4″ radius, allowing the screen’s breathtaking video content to flow around the building smoothly and seamlessly.

The Media Wall features a resolution sufficient for two 4K displays stacked on top of each other with room for additional content. With an overall resolution of 4,752 pixels high by 3,840 pixels wide, The Media Wall is one of the largest displays of its pixel pitch in the United States. 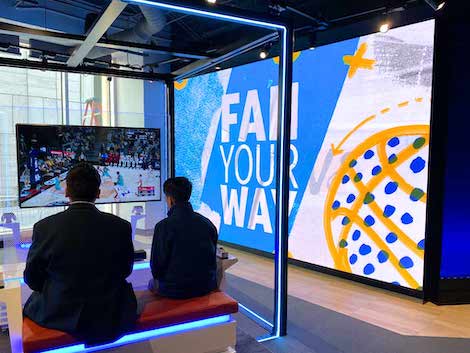 When designing the store, AT&T sought ultra-fine-pitch LED technology that would allow visitors to explore a range of immersive experiences, including interactive, limited-time pop-ups. All LED screens in the store are from SNA Displays’ BRILLIANT Interior line of display products, each employing a narrow pixel pitch of 1.92 mm.

The design concept for AT&T’s 37-story global headquarters, which has over one million square feet of office space, was to create a modern media lobby with a one-of-a-kind, floor-to-ceiling fusion of architecture, multimedia content, and technology. 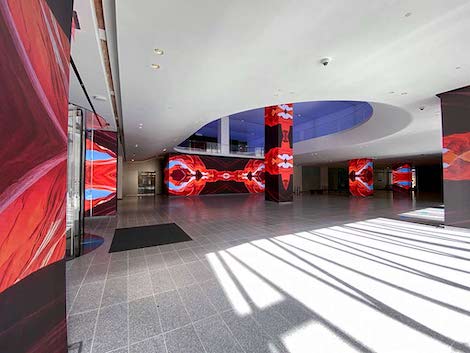 The AT&T Lobby consists of eight LED-wrapped rectangular columns and the Media Box, a large three-sided video wall that serves as the lobby’s focal point. The LED columns vary in height throughout the lobby and can be synchronized with the Media Box and the location’s expansive LED ceiling “veil,” a diffused lighting feature from the second story which visually connects each of the lobby’s digital elements with color.

Given the close proximity of walk-up visitors in the lobby, the Media Box and digital columns were also built with 1.92 mm pixel pitch technology from SNA Displays’ BRILLIANT Interior product line. In total, the lobby video technology includes more than 70 million pixels and 3,000 square feet of LED canvas.

The content featured in the lobby is one-of-a-kind and designed to create unique moments of immersion into the AT&T brand, accented by strategically placed audio that surprises and delights visitors and employees as they navigate their way through the space.

This entry was posted on Thursday, July 22nd, 2021 at 13:47 @616 and is filed under DailyDOOH Update. You can follow any responses to this entry through the RSS 2.0 feed. You can leave a response, or trackback from your own site.