In early October AVIXA had no choice but to admit that they only had 350 or less exhibitors and redrew the show floor [1], if you look again you will see that since then it has shrunk even further, with now less than 300 exhibitors. 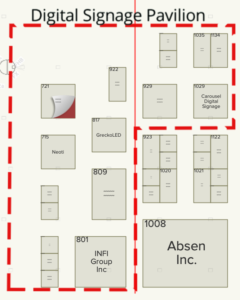 As of early October, it has now got smaller!

One of the areas most affected is the much touted #InfoComm21 Digital Signage Pavilion which now makes particularly poor viewing. It originally listed the following (17) exhibitors: –

It now only lists nine or 11, with booths #929 and #1029 (which was allocated to Carousel Digital Signage) now empty, it looks like folks such as Mitsubishi Electric – Diamond Vision Systems Division, Neoti and Screenfeed all seemingly having decided not to exhibit.

This pavilion is going to be a ghost town and makes an absolute mockery of AVIXA’s claim that they have any sort of focus on Digital Signage.