Marathon Oil, an independent exploration and production company in the energy sector, recently commissioned a dynamic digital showpiece for the lobby of its new headquarters in Houston, Texas. 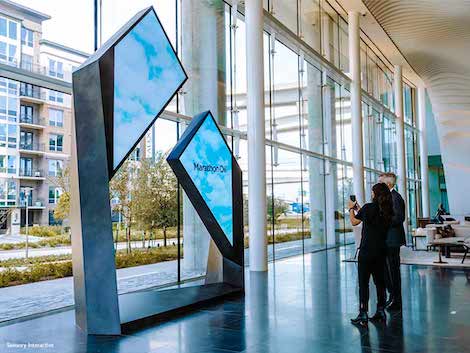 Andrew Yee, senior associate of project management for Sensory Interactive told us “Motion sensing and data driven visualization features were integrated into a suite of services, so that the sculpture could react to ambient foot traffic in such a grand space. In order to get the optimum results for the client, we used highly customized control systems that aren’t typical in corporate spaces.”

The two flag-like LED displays of the digital sculpture employ a tight 1.25 mm pixel pitch, allowing for optimal viewing at very close proximity. Despite totaling only 40 square feet of display canvas, the pixel density is such that the pair of quadrilateral screens are packed with 2.4 million pixels.

According to Sensory Interactive, the digital display blends art and advanced motion capture technology that responds to visitors as they move through the space. The art piece, whose form draws inspiration from crystal shapes found in geology, passively relays foot traffic data, allowing screen content to adjust dynamically. However, users can also actively interact with the piece through gesture tracking to explore Marathon Oil’s history, learn about staff, and view a changing catalogue of content types such as branded content, ambient/artistic content, and community content.

The geode-inspired structure is clad in non-reflective aluminum with a marble stone veneer and was built to appear as a monolith, a single unit with no apparent joints. Furthermore, the lattice-like frame appears different to viewers when observed from various angles. For example, the screens appear to be on the same spot along the z-axis when viewed straight on, but moving to the side reveals that they are offset. The forced perspective change encourages visitors to contemplate the piece from various vantage points.

Jason Helton, executive vice president for SNA Displays said “More and more, we’re finding that prospective clients are implementing designs that incorporate LED technology and include brilliant visuals, real-time data, or interactivity; sometimes, all of the above,” said . “Particularly with digital sculptures, customers are finding lots of value in being able to entertain and even inspire visitors with technology that fits within their existing design or branding.”

Marathon Oil Corporation is an independent exploration and production (E&P) company focused on four of the most competitive resource plays in the U.S., complemented by a world-class integrated gas business in Equatorial Guinea. They became an independent E&P company on July 1, 2011 and are based in Houston, TX.

This entry was posted on Tuesday, November 16th, 2021 at 18:35 @816 and is filed under DailyDOOH Update. You can follow any responses to this entry through the RSS 2.0 feed. You can leave a response, or trackback from your own site.