PORTL Inc., a revolutionary ‘plug & play’ holoportation platform which lets people beam anywhere in the world in real-time, lifesize, 3D form, has announced the close of its $12M Series A round. 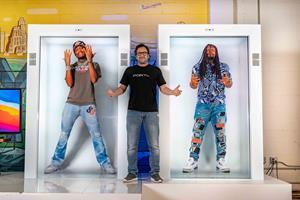 The round was led by TRUE Capital Management LLC (Coinbase, Palantir) and was joined by returning investor, Tim Draper (Tesla, SpaceX, Skype), plus entertainment and sports superstars, including Marshawn Lynch, Quavo, Breanna Stewart, Albert Pujols, Luke Walton, and others.

According to Doug Barry, PORTL’s Co-Founder/COO and former Pandora VC and EA executive, the new financing will be used to expand PORTL’s global live streaming platform, launch its mobile and MINI products, grow its tech and sales team and to service its quickly growing customer base across live events, entertainment, education, retail, healthcare, corporate communications, and tech.

David Nussbaum, Founder, Inventor and CEO of PORTL said “CEOs, brands, universities, as well as crypto artists are all using PORTL to connect and communicate in entirely new ways. PORTL is going to change the way we work, learn and play forever. We’re very lucky to have investors who see the vision as well.”

In the year since the seed round, Reuters named PORTL the number one innovation at Mobile World Congress 2021 Barcelona, and PORTL was announced as a triple honoree at the CES Innovation Awards for 2022. PORTL perfected its Epic platform, which is the only plug-and-play, completely self-contained, 4K volumetric live streaming platform for presenting the imagery commonly referred to as holograms. PORTL’s exciting new form factors such as the upcoming Miniare expected to come to market in early 2022.

This entry was posted on Sunday, November 21st, 2021 at 17:44 @780 and is filed under DailyDOOH Update. You can follow any responses to this entry through the RSS 2.0 feed. You can leave a response, or trackback from your own site.