IF Music Inc. has designed and manufactured this whimsical kiosk that offers, sells and delivers digital music tracks to almost any device. 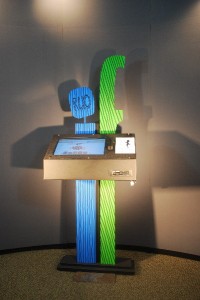 Kent White and his business partner Michael Boyd tell us that devices supported include all MP3 players, phones, iPods as well as virtually any other memory device such as flash drives, memory cards and laptops.

Kent told us “We have done extensive research and trials across the United States and the United Kingdom. Early on in our research we became convinced that there was a large void in the marketplace for the social enjoyment of music, particularly amongst the highly profitable age 14-25 demographic who no longer had opportunities to enjoy and purchase music from the rapidly disappearing music stores but still longed for an excuse to be out of the home and socializing”

Proprietary software advertises and promotes the retailers that house the kiosks along with offering advertising and promotional revenue opportunities to partners.

Kent continued “Our in-depth studies of those who had tried to capture this market but failed showed severe deficiencies in every aspect of their model including depth and breadth of content, software usability and reliability, and the ability to the kiosk to attract in a market saturated with high quality but mundane units”

All advertising and offers are programmed on-line and can be changed locally or nationally from any location in minutes. When required offers, tickets etc. are provided through a wireless printer option.

This entry was posted on Friday, August 28th, 2009 at 08:44 @405 and is filed under Scuttlebut. You can follow any responses to this entry through the RSS 2.0 feed. You can leave a response, or trackback from your own site.