In celebration of Black History Month, Lamar Advertising Company [1] (Nasdaq: LAMR), one of the largest outdoor advertising companies in the world, has announced that the company will use its national network of digital billboards to recognize nine African Americans whose achievements and accomplishments broke barriers and changed U.S. history. 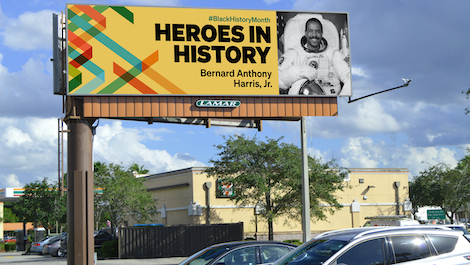 The ‘Heroes in History to be featured on billboards through February include:

“For Black History Month, we are proud to once again use our national digital network to honor prominent African Americans and hopefully inspire people to learn about their incredible achievements,” said Sean Reilly, CEO of Lamar Advertising Company.

In all, Lamar’s Black History Month campaign will be featured on hundreds of digital billboards across the U.S. Lamar will amplify the campaign using its social media channels to share more information about the featured individuals. Additionally, Lamar offices will also recognize local African American leaders and heroes on digital billboards in their respective markets.