AVIXA have announced that last week’s #InfoComm22 attracted 19,681 attendees. Not only is it less than half of the 44,000 people who attended back in 2019 (the last pre-#Covid19 pandemic event) it is actually the lowest since 2008 and says a lot about the struggles that both AVIXA and large trade shows in general are going to have over the next few years. 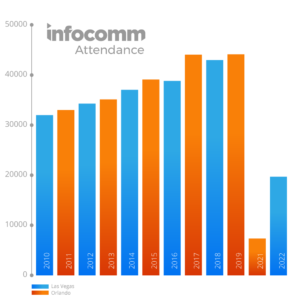 [1]522 exhibitors (another low, there were 950 stands in 2019) showcased pro AV products and solutions across 294,500 square feet of the trade show floor, although much to the chagrin of almost all attendees this exhibition space was (needlessly) spread between the new West and old North Halls at the Las Vegas Convention Centre.

Rochelle Richardson, SVP of Expositions and Events, AVIXA tried to put a good spin on the poor attendance and was quoted as saying “This week has been a celebration of and for our industry – from the trade show floor to the AVIXA council events to our educations sessions. There are many people and organizations that help make this show possible – the exhibitors, sponsors, attendees, speakers, media, the Las Vegas Convention Center, Freeman, and the AVIXA staff. It’s truly the contributions and collaboration from so many that makes this such an exceptional event.”

In our opinion, all the stands were much smaller than usual (for example, the usual brilliant LG stand was a shadow of its former self) but all booths were probably the correct size for what little technology the exhibitors actually had to show. There were very few new product launches and supply chain issues were the talk of the trade floor and social media.

DVLED seems to be the (big) product that everyone is now focused on and while it’s very nice to view and look at in person, it is no more exciting than LCD was.

As is standard for AVIXA these days they did a poor job with social media and the impressive social media conversation that happened from the truly dedicated #AVTweeps during the week was despite the organisers and not because of anything they did. AVIXA’s marketing department continue to confuse attendees with InfoComm 2022 and IC22 branding and signage and did nothing to promote their own official hashtag #InfoComm22.

Despite some hashtag leakage to #Infocomm, #Infocomm2022 and #IC22 the hashtag analysis for the last 30 days from our sister site https://aka.tv [2] saw…

Anyhow whatever way you look at it, this show is their smallest since 2008. Even Infocomm some 15 years ago managed to attract 30,000 visitors. It wasn’t until 2017 when the attendance figure hit 40,000 and it’s likely to take a long time for the show to get back to that level again.