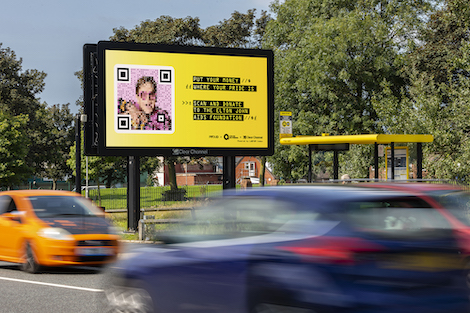 David Furnish, CEO of Rocket Entertainment and Chairman of the Elton John AIDS Foundation told us “Elton’s face has appeared on album covers, tour posters and all sorts of fabulous merchandise – but a QR code is certainly a first. With the support of Ogilvy UK and Clear Channel, we are thrilled to have been able to create a meaningful and purposeful fundraising platform in celebration of Pride month that drives the Foundation’s mission forward in overcoming stigma and hate.”

An iconic image of Sir Elton John has been transformed into an LGBT-QR Code – a new fundraising mechanic which turns functional monochrome QR codes into instantly-recognisable design icons. Appearing in European cities and alongside Pride march routes throughout the Summer, each LGBT-QR Code takes users to a donation page for the charity.

Matt Waksman, Strategic Partner, Ogilvy UK said “While the pandemic normalised QR codes, we saw an opportunity to use creativity to transform a traditionally functional format into a new fundraising platform. Who better to partner with than one of the world’s most recognised LGBTQ icons, Elton John?”

Stepping beyond the norm of a tokenistic support message, Clear Channel will turn thousands of digital Out of Home screens into donation touchpoints powered by LGBT-QR codes, aligning allyship and fundraising through one simple platform.

Jason Jarvis, Creative Agency Account Director and LGBTQ+ Crew lead, Clear Channel UK was quoted as saying “As a one-to-many medium, Out of Home is the perfect platform to deliver campaigns that inspire, educate, and support the audiences we serve and represent. Celebrating the LGBTQ+ community has been important to Clear Channel and by partnering with Ogilvy again we hope to make an even more tangible difference this Pride season. Flipping media sites into donation points is totally aligned with our support of LGBTQ communities and we’re excited to see this new campaign come to life alongside Pride marches in cities across Europe this summer”

The LGBT-QR Codes will first appear in Utrecht, then Rome, before rolling out across Europe.

This entry was posted on Thursday, June 9th, 2022 at 12:00 @541 and is filed under DailyDOOH Update. You can follow any responses to this entry through the RSS 2.0 feed. You can leave a response, or trackback from your own site.