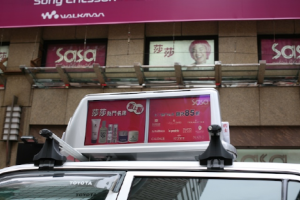 While still fine-tuning its initial 30 taxi-top units currently in soft launch in Hong Kong, Mantise Media management already has plans to spread out beyond Hong Kong, initially to Shanghai. It plans to expand its technology and service throughout Asia in phases.

“We have plans to launch in other Asian markets,” says Douglas Khoo, Hong Kong-based vice-president sales and marketing. “China certainly offers a huge market but one that needs to be treaded carefully and with the right partner. We plan to have 200 units by the end of this year in Hong Kong.”

Combining patented technology with traditional media, Mantise offers retailers and marketers unprecedented versatility and maximum exposure, enabling advertising and real-time information to be broadcast to target audiences at preferred locations and specific times. Allowing a morning, noon and evening rotation, advertisers can easily have three different ads for each time zone, making it a good vehicle for fast food chains and restaurants. Further, they can run temperature-based advertising, so an ad can be exposed at set temperature, for example, promoting a cold beverage ad at 32 degrees or a warm beverage ad when it’s below 20 degrees.

The creative flexibility also allows mobile promotions. An advertiser can run an interactive mobile phone campaign, with downloading of e-coupons or sending of SMS.

The home-grown product is not only Asia’s first geo-targeting out-of-home media solution, but is believed to be the first launched outside the U.S..

“We have already invested millions of dollars in research and development over three years,” says Khoo. “With the product in its fourth generation, we are delighted to see how we can help make ripples for advertisers’ and marketers’ campaigns through this innovative medium. We’ve had three other prototypes that we developed for testing and submission. As with technology, there is constant improvement on what’s available. So while the main outlook of the unit did not change much, the internal components went through a number of significant changes.

“We work very closely with the LCD panel manufacturer (LiteMax) as well as some of the other components suppliers to ensure that the unit as a whole works seamlessly and efficiently.

“We’ve been working on this project for over three years and have been battling with the government on getting final approval. There were a lot of regulations that we had to overcome but, chiefly, it was the safety aspect that mattered most. The Chinese market is a complex market. Nothing is what it seems and certainly not as straightforward as other Asian markets. The partner that we select would certainly play a strategic role. We are still in the midst of working out our China rollout. We received the approval early this year and proceeded with the soft launch. There were some minor technical bugs that needed to be attended to but nothing that our skill technical crew could not overcome. We are already working on an improved model and should have it out in the market in the near future.”

Mantise’s patented telematic technology integrates GPS, and wireless transmission of real time data and messages, making real time advertising possible. Each LCD panel is equipped with GPS and 3.5G wireless system to enable individual taxi to be located so that different content will be transmitted and displayed in real time based on the geographic location of the taxis. The fully automated wireless data transfer also minimizes error and enhances reliability and efficiency.

“The centralized management control system also enables effective airtime tracking of advertising schedule,” says Khoo. “Advertisers will receive weekly reports on time and location of exposure for easy tracking on the effectiveness of the advertising campaign. The low production cost and quick turnaround time if messages need to be changed or rotated are additional advantages.”

This approach is particularly effective in densely populated urban areas like Hong Kong and Tokyo, where heavy traffic will increase audience exposure to mobile marketing campaigns.

“Advertisers and marketers use traditional, fixed-location advertising solutions all over Asia,” says Ma. “With close to two decades experience in the Asian market, we find that there is considerable demand in Asia for more efficient and targeted advertising. The shift from traditional advertising patterns towards this revolutionary approach will be an answer to the market.”

Members of the management team were founders of the company.

Ma was previously the CEO of Intelligent Transport System Holding Ltd. (in the field of telematics in Hong Kong). He earlier held key management positions with U.S. multinational corporations including AT&T, TYCO and Adobe.

Khoo, who has a wealth of interactive and traditional advertising and marketing communications experience in Asia. Previously, he built M-Digital and was General Manager of China for Mindshare in addition to other senior management positions in WPP group of companies, including Ogilvy & Mather and J. Walter Thompson. He also co-founded a number of internet companies in Asia.

This entry was posted on Friday, August 28th, 2009 at 07:30 @354 and is filed under DailyDOOH Update. You can follow any responses to this entry through the RSS 2.0 feed. You can leave a response, or trackback from your own site.