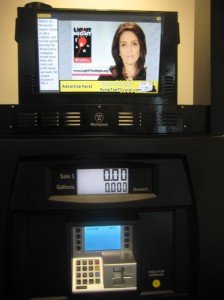 The Tina Fey PSA promotes the LLS’s ‘Light The Night’ Walks in cities across the U.S. and Canada that raise hope and funds for those battling cancer. The Leukemia & Lymphoma Society‘s Light The Night Walk is the nation’s night to pay tribute and bring hope to people battling cancer. On these special nights, thousands of participants carry illuminated balloons and raise funds for vital, lifesaving research and patient services.

Funds raised through Light The Night Walk support the work of hundreds of in their search for better therapies and cures for leukemia, lymphoma and myeloma.

“We are honored to be able to use PumpTop TV’s considerable reach and technology to help Tina Fey and The Leukemia & Lymphoma Society in their ongoing efforts and we applaud the work they are doing.” says Douglas Woo, executive vice-president, AdtekMedia, which owns PumpTop TV. “The PumpTop network’s ability to instantly target and tie campaign information to local and regional markets makes it an ideal venue for PSAs as much as for our advertisers such as AudiRolaids, and Jack in the Box. We offer targeting capabilities and flexibility that traditional TV cannot match.”

The “Light The Night PSA is integrated into PumpTop TV’s 4.5 minute video program loop of entertainment and information that plays continuously throughout the hours the stations are open. (The average station is open 22 hours per day.) On average, the PSA will air almost 300 times per day, per screen. The videos, which play in :15 and :30 lengths, are accompanied by vertical and horizontal banners as well.

Funds raised through Light The Night Walk support the work of hundreds of in their search for better therapies and cures for leukemia, lymphoma and myeloma.

PumpTop TV recently announced a joint venture with Outcast, which lets advertisers reach a combined audience of more than 20 million motorists each month on 12,600 screens at service stations and convenience stores nationwide, including 15 of the top DMAs.

This entry was posted on Thursday, August 27th, 2009 at 08:50 @410 and is filed under DailyDOOH Update. You can follow any responses to this entry through the RSS 2.0 feed. You can leave a response, or trackback from your own site.