A month after its official launch, QMS’ new City of Sydney digital street furniture network has been welcomed by brands and agencies, with a high level of demand across the rest of 2022 and into 2023. 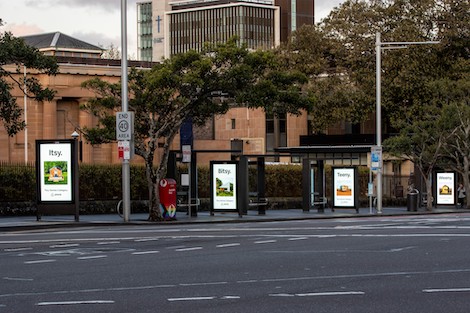 The categories that have joined the launch partners* across the network in recent weeks include luxury retail, finance, entertainment, technology, travel, automotive, alcohol and hardware and home retail, with others set to follow in the weeks to come.

The launch of QMS’ innovative network delivers a new class of premium outdoor advertising, capable of impacting the Sydney market at scale. Across 26 square kilometres and 33 suburbs, the network reaches 2.6 million^ people a week, two-thirds of whom live right across the Greater Sydney region.

QMS’ General Manager, City of Sydney, Jemma Enright told us “The response to the official launch of the network and the start of campaign-based selling has been fantastic. We’re delighted to welcome a host of new brands to our world-class network, providing a compelling digital format in one of Australia’s most important markets. Demand in the lead-up to Christmas has been very strong with activity starting to build into early 2023. Our easy-to-buy, data-informed packs offer advertisers the ability to tailor, optimise and activate campaigns at scale. With over 30 options available, our new City of Sydney packs have been very well received, in particular because 90% of the inventory is digital. We are seeing smart activations being booked already across the network, such as Airbnb’s use of Consecutive Impact panels with a clever creative strategy. Launch partner Diageo dominated key panels and CBD locations around Sydney’s World Class Cocktail Festival, while fellow launch partner Optus capitalised on the immediacy the digital-led offering delivers by welcoming Ash Barty across the network as its ambassador moments after the media conference”.

In June 2020, QMS was appointed to an exclusive 10-year agreement, plus a further five-year option, to create a premium, reimagined network of street furniture for the City of Sydney.

The agreement includes a newly designed suite of bus shelters, kiosks, public toilets, seats and bins to replace the current furniture, most of which had been in place since 1997.

This entry was posted on Tuesday, September 20th, 2022 at 03:48 @200 and is filed under DailyDOOH Update. You can follow any responses to this entry through the RSS 2.0 feed. You can leave a response, or trackback from your own site.