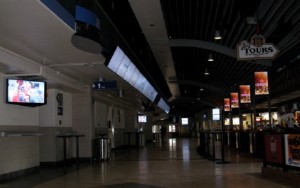 The project, among the most sophisticated in the sports facility world, was built around a media communications plan that sees the fan experience dramatically enhanced, sponsor messaging opportunities boosted, and a media sales plan developed that should see the building owner, Maple Leaf Sports and Entertainment, recover its investment in roughly two years.

Among the five busiest sports and events centers in the world, the facility, home to the NHL’s Toronto Maple Leafs, NBA’s Toronto Raptors, Toronto Rock Lacrosse team and host to entertainment, concerts and live events, has received more than 27 million fans and over 2,000 events since its doors opened in 1999.

The screen network is part of a massive $50 million facelift to the landmark facility. It now has more than 320 HD-quality video display monitors installed in a wide variety of configurations in the public areas. The screens serve several purposes, but many are replacing traditional backlit poster advertising boards, enabling MLSE to change messaging by event and on very short notice. Network digital screens give MLSE’s media department the ability to tailor advertisers and schedules by event and target audience. 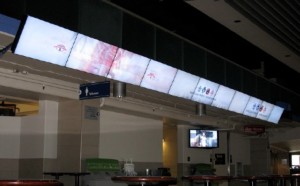 MLSE managers knew they wanted to transition the facility entirely to digital, but having limited direct experience, were struggling with just how to bring it to reality, says Stuart Kirkpatrick, DDC president and CEO.

“They brought us in to help them take what was a concept, and really get it grounded … so that there was some sort of process,” Kirkpatrick says. “They had quite a number of issues they needed to address, and we helped out with all of them.”

Central to the process was DDC’s Full Picture Workshop process, which the company uses with all of its clients, taking them through a process that starts with strategy and objectives and steps through the elements of a plan, all the way through to deployment and operations.

“Based on understanding of what is both needed and wanted, we recommend a platform from both a functional and operational perspective,” says Kirkpatrick. 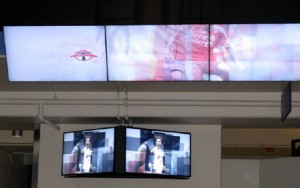 That initial strategy engagement at Air Canada Centre turned into much more, Kirkpatrick said, with various members of the DDC team helping develop everything from realistic media revenue forecasts and content programming concepts to guiding the vendor selection process and managing the installations. DDC is also doing some of the creative content work for the screen network.

“DDC was instrumental in the very early stages in helping us to define not only our business objectives, but the philosophical approach as well,” says Dwayne Brown, MLSE’s manager of venue services. “Digital Signage is so much more than just placing a display on the wall and sending a graphic to it. Location, audience, time of day or event, type of content – it all needs to be taken into account and DDC is aware of that. Its guidance has helped us design a unique system that is sure to catch the attention of the thousands of people that come through our gates every event.”

“The MLSE people are sophisticated and they did their homework,” says Kirkpatrick. “They could see the value in doing a lot more than just putting up a bunch of TVs all over the place, which is still pretty typical. This is very different.” 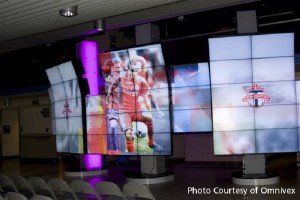 Screens are set in a variety of configurations and clusters to provide more presence and visual interest. At one newly renovated entry, 42 LCD flat panels are stitched together and other areas feature screen clusters. One area that was using still images for a history wall is now a cluster of different-sized and oriented screens, with rotating images and narratives on the images that can be heard if fans call designated numbers and listen using their mobile devices.

The digital signage deployment includes the use of Omnivex’s newest software product, Moxie, to manage the full network of LCD screens. Content will include a live video stream from inside the arena to ensure fans don’t miss a moment of the action when in the concourse areas. In addition, information will be shown to help people navigate the facility and to promote upcoming events being held at various MLSE facilities.

Advertising space on the screens will provide a new revenue stream, and augment traditional print advertising. The screens have been strategically placed for maximum impact and configured in unique ways to add to the aesthetic appeal of the facility.

“The Omnivex powered digital signage network is a fantastic medium that will keep our fans and guests informed, while providing value to our many partners and stakeholders,” said Bob Hunter, executive vice-president of venues and entertainment for Maple Leaf Sports & Entertainment.

“Omnivex’s Moxie software rose to the top for this project, because it has powerful graphics capabilities and for its advertising, content management and strong IT support tools,” says Kirkpatrick, “Moxie will allow the content to be tailored to each location according to the specific event, audience and time.”

Other key business partners active in the project include IBM [4] for network services, TTUFF Technologies [5] for media players, consultant Lyle Bunn [6], Envision for retail design configuration, and the Taylor Group [7] for installation.

Air Canada Centre’s digital signage system will be unveiled for fans and guests during the Toronto Maple Leafs [8]’ preseason game against the Boston Bruins [9] on September 16. Subsequent phases of MLSE’s deployment will continue in 2010, both at the Air Canada Centre and at other facilities managed or owned by MLSE. These include Ricoh Coliseum [10] and BMO Field [11].