AMD have just launched their ATI Eyefinity technology in the shape of a multi-output graphics card that can drive six displays from one PC and together with some new screen technology that will be along in a couple of months we believe it may change the way people view and build big displays. 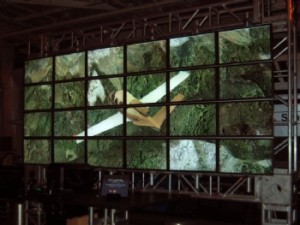 Whilst the focus in the mainstream press when discussing this technology is on gaming, immersive media and control room type applications, there is plenty of potential here for big digital signage projects, with the capability of driving displays at their native resolution to create an enormous overall canvas, with a theoretical maximum of 268 megapixels across the whole display area.

The picture above and to the right shows a system built with 4 cards giving a 55 megapixel display.

Samsung of course have been developing their thin bezel technology (some of which we saw on their stand at InfoComm 2009) and have been working with AMD, and there are other interesting up and coming hi-resolution screen technologies that we can think of that would be well placed to take advantage of such a large resolution capability.

Shape is the new king

One thing in common with all the video walls we see demonstrated is that they are square or rectangular and usually solid (i.e. no holes anywhere in the shape). One of the things that Adrian has been talking about publicly for some time now is what he calls ‘shape is the new king‘ and it looks like the industry will soon have all the required elements in place for this finally to become a reality.

Take a look at just some of the possible shapes that could be built in the diagram to the left.

Perhaps because every screen display technology at the moment has bezels, and even, however thin those bezels may be, those ‘seams’ blight the shapes in question or whether it is fundamentally down to a lack of creativity from those doing the deployments we don’t know yet but we know for sure that this is all about to change in the coming months.

I am going to come back to the way we describe new shapes in a second but for a moment let me park the idea with you now that the video wall you see powered by the ATI Eyefinity in their Lab video demo, can be described on paper in a formula as _3X2_TTT_TTT_

You might think that a naming convention like this does not make that much sense when the shape is square or rectangular and is made up of solid tiles, i.e. no gaps or no holes, but what about a screen configuration that is in the shape of a letter ‘T’, a cross (as shown on the left) or what about the Scala powered Z shape screen featured in our story about the Miele installation in Amsterdam – for the record that Z shaped screen would be a _3X2_HTT_TTH_

It’s then that you really need a reliable method of describing the endless possibilities that are on offer.

Furthermore, this screen configuration flexibility means that content providers have a new set of criteria to consider when designing for the display. They will need to take into account the intended screen shape and configuration when designing and programming content to ensure that it is displayed on the screen as intended because of course the previously fixed rectangular shape of a video picture is no longer a given.

The ‘Issy-Neale Formula‘ is a method which we have come up with in order to provide a common framework for content creators during the process of designing content for irregular shaped displays and different screen configurations.

It’s something we will be discussing in much more detail over the coming weeks.

This entry was posted on Friday, September 11th, 2009 at 16:15 @719 and is filed under DailyDOOH Update. You can follow any responses to this entry through the RSS 2.0 feed. You can leave a response, or trackback from your own site.