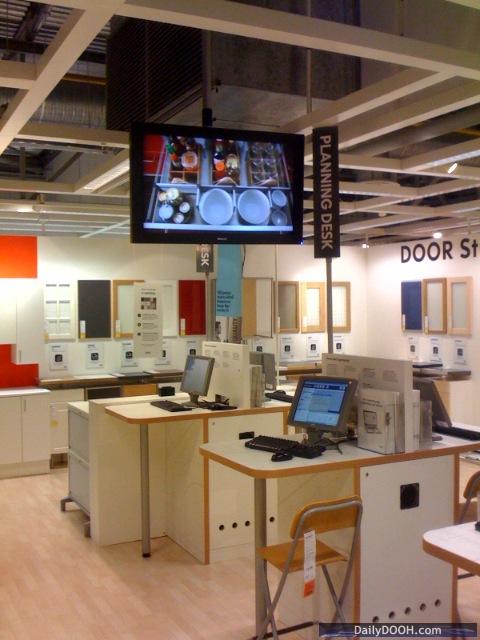 Quite possibly every single person who reads this blog will own at least 1 item of IKEA furniture, most probably a bracketless shelf… anyway I digress.

I was at IKEA last Thursday morning (Caerdydd, Wales) and unusually it was fairly empty which might have been why I noticed the in-store screens they have rather than trying to fight my way through Mum’s with shopping trolleys.

I stopped and looked for quite a while checking out the content they were using – it isn’t bad at all, in fact it is a great example of how to shoot footage in a ‘graphic way’.

I have covered this topic a number of times within presentations…

When creating content for DOOH, especially in a very busy, visually dynamic environment such as IKEA where there are 101 other things to look at apart from a screen, it is important that your message can be sent and received visually via your screen in the shortest possible timeframe.

Techniques that can be used to do this include shooting in a very graphic, simple style – smooth movement if any, simple shapes, less visual clutter in a scene and lots of short sharp cuts.

The content I saw did a lot of this – often using white backgrounds, building up a room with furniture for example with cuts where a product instantly appears (the snap / flash of a new image captures a viewers attention well) as we get a slow pan of the entire room.

They also mixed graphic elements with live action – another good technique to describe a short story to build a message.

What was also interesting was that the content was appropriate and relevant to the zone on the shop floor – so if it was kitchen products then there were 30 second sequences on various layouts and what items work well together depending on your choice of kitchen and the space you have to work with – similarly these short ‘stories’ were told in very short spaces of time. All good.

Now all they have to do is lower the screens or re-position them so I don’t get a crick in the neck, integrate the music so we don’t have multiple sound sources, offer free wi-fi everywhere so kids and Dads can entertain themselves if need be (and go online to find things) and use RFID for product locations!

This entry was posted on Monday, April 28th, 2008 at 19:06 @838 and is filed under Scuttlebut. You can follow any responses to this entry through the RSS 2.0 feed. You can leave a response, or trackback from your own site.