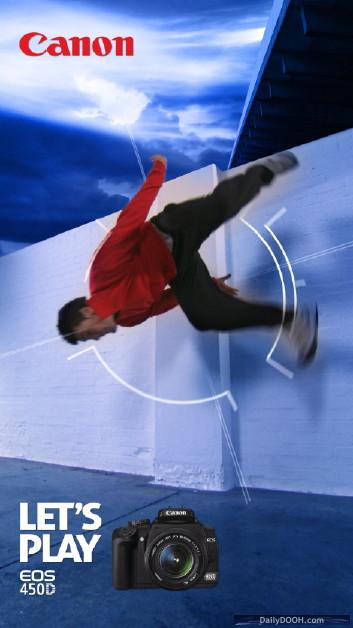 To mark the launch of the Canon EOS 450D, the latest model in the EOS range of digital SLR cameras, Canon has started a cross network digital outdoor campaign.

Working with BJK&E, Grand Visual [1] shot HD material on the day and produced a sequence which features a freerunner on his journey through an urban landscape. As part of a series of athletic leaps and vaults the freerunner grabs the EOS 450D and drops in on his colleague – a freestyle footballer and takes a photograph of him performing tricks.

Using footage from their ‘Let’s Play!’ freerunning live event hosted earlier this month at the Truman Brewery, London, the campaign breaks on CBS Outdoor’s digital escalator panels and Titan Outdoor’s Transvision network on the 5th May 2008.

The multi-screen execution designed for CBS Outdoor’s digital escalator panels shows the freerunner jumping from screen to screen on his urban journey across five panels.

Campaign is planned by BJKE and booked through Kinetic.