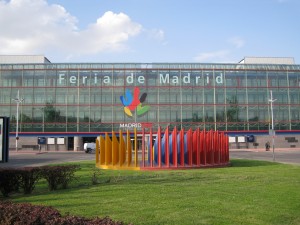 In a cunning attempt to prevent international visitors from attending this event the organisers forgot to change the travel instructions on the English version of their web-site and sent all of us to the exhibition grounds used at last year’s show!

This was a bit like going to Hackney instead of to Hounslow and okay, okay so we lost a couple of hours figuring that out and enjoying the delights of Madrid’s Metro system but maybe, just maybe it was my fault – I promise to try to learn some Spanish for next time. 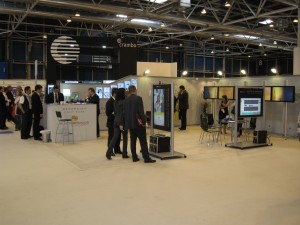 The reason for changing venues though was quite obvious when I eventually found the correct one. Total Media 2008 was the first show ever and its success encouraged the organisers to upgrade to a bigger, better, much shinier building.

First impressions count, and these were very good. Our receptionist was a chirpy girl from Dublin, an expert in the art of audio-visual trade shows and flown in especially for the occasion. 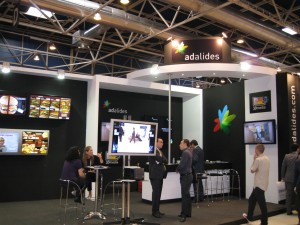 Entering the exhibition space was at once welcoming, somehow light and airy but buzzing with excitement – a feeling of smartness and efficiency pervaded the air.

The stands were elegant, uncluttered and the audacious choice of a light coloured carpet set them off to best effect. A real designer-led trade show.

But it wasn’t all about show. People were there to do business and almost every stand had bunches of people in intense conversations at various times of the day. 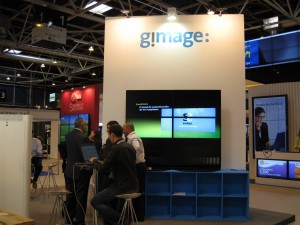 Everyone that I met was very friendly, welcoming and polite – all extremely civilised – and all (but one) found a competent (and modest) English speaker to welcome me – Russ, tienes que mejorar tu español para el próximo año, Ed

The overall mood of the exhibitors that I met was calmly, reassuringly positive.

The pioneers who had been there last year had been pleased with the first year results, and all felt that this year’s show got off to a great start. 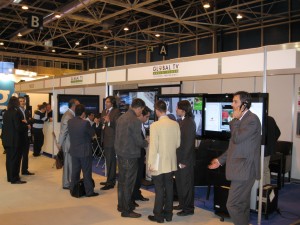 The consensus was that it may probably be about the same amount of visitors as last year, but spread out across a greater area, it didn’t seem quite so crowded.

The last year has been tough, as it has for everybody, with a lot of major projects being delayed or put on hold. However, budgets are now being unblocked and we can expect to learn about some exciting new projects in the coming months.

The Spanish are very modest about the state of their industry in comparison to the US or UK, but I met some very competent professionals who are in the process of catching up very quickly.

This entry was posted on Friday, October 2nd, 2009 at 07:25 @350 and is filed under DailyDOOH Update. You can follow any responses to this entry through the RSS 2.0 feed. You can leave a response, or trackback from your own site.