Investor Conference Off To A Great Start

Day One of the Digital Signage Investor Conference in New York ended up with a very knowledgeable speaker from the banking community: Ken Sonenclar, managing director of DeSilva + Phillips, a company involved in media investment banking, who gave those interested in buying – and especially selling – some hope that the market isn’t hopeless.

More on Sonenclar later this week, but here’s a rundown from the first three speakers of day one (Tuesday 6th October 2009)

Stephen Nesbitt, conference chair and president & COO of Reflect Systems Inc., Dallas, spoke of the fragmentation of the industry and the fact that people are spending more time out of home than in the past, topics echoed by several later speakers. 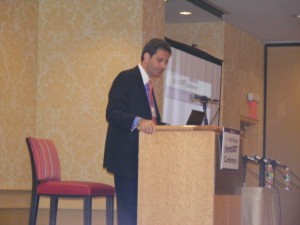 He said that the focus of the industry has progressed from an enterprise focus through a focus on store operations, and now to phase three: a shopper experience focus.

“If you can tie an emotional need to a functional benefit at store level, you can make a sale,” he told the audience comprised mainly of a mix of investors, entrepreneurs, network operators and integrators.

Andy Querin, president & COO Zoom Media, Montreal, spoke of his company’s nine networks and said the company is currently working on its European expansion, particularly in the fitness sector, starting with the UK and now with a small operation is Germany. The focus is on Europe, not Asia, he said. 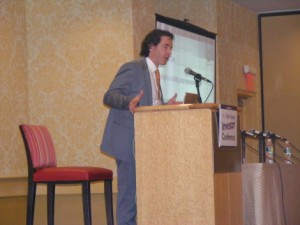 Querin, who said 80% of Zoom’s revenues now come from national campaigns, also said that Zoom is now bringing ClubCom into Canada. He outlined the company’s recent growth, including the $30 million investment this year into Zoom by ABS Capital Partners, and the acquisitions in the past year of ClubCom, Smart One Media, and the Wellness Health Education Network.

“And we have money in the bank,” he said.

Noting Zoom product measurement with the Canadian Outdoor Measurement Bureau, Querin was the first of numerous speakers to stress the need for solid metrics if the fast growing digital sector was to be accepted by agencies and advertisers.

Dr. Leo Kivjarv, vice-president research, PQ Media LLC. Stamford, Connecticut, said that about 40 companies in the digital out-of-home sector, had closed or gone out if business in the past 18 months. 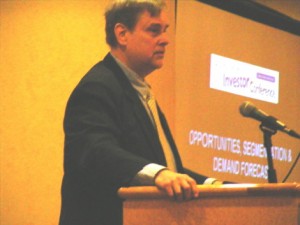 “This is the ‘Shake Out to Break Out’ period,“ said Kijarv. Compared to 8% of media consumed out of home in the 1960s, he said that that figure is now 45%, with more people seeing advertising while sitting in traffic, waiting in line and delayed in airports.

“DOOH is transforming the OOH industry,” he said. “DOOH grew approximately 12.3% to $2.43 billion in 2008. Video ad networks take the largest share with with about $1.41 billion, with digital billboards with a smaller share.”

Kivjarv wanted to destroy the ‘myth’ that there are about 700 video ad networks.

“There are really about 250 – mainly in the retail space,” he said. And he sees traditional OOH declining 4.9% this year.”

He predicts that brands will start to come back to traditional advertising in 2010, and there will be improvements in most sectors – including newspapers, which he says will do very well by 2013, “because the bloodletting will already have been done.”

Kivjarv ended his discourse with what he considers the top 10 investment criteria, noting the top three as: unique value proposition; measurement; and engagement.

This entry was posted on Wednesday, October 7th, 2009 at 04:49 @242 and is filed under DailyDOOH Update. You can follow any responses to this entry through the RSS 2.0 feed. You can leave a response, or trackback from your own site.