Signagelive were up for awards in three categories at Friday’s annual UK AV awards show and we thought they were sure bets for two of them. 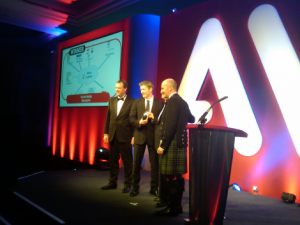 As it happens it was ONELAN who sponsored the Digital Signage Manufacturer of the Year award this year (the award that they won in 2008) and it was ONELAN’s David Dalziell who was on hand to present Jason Cremins with the evening’s coveted prize.

Anyway congrats from all at DailyDOOH (and, err why is it our team never gets an invite to your table on the night?).

This entry was posted on Saturday, October 10th, 2009 at 10:14 @468 and is filed under Scuttlebut. You can follow any responses to this entry through the RSS 2.0 feed. You can leave a response, or trackback from your own site.