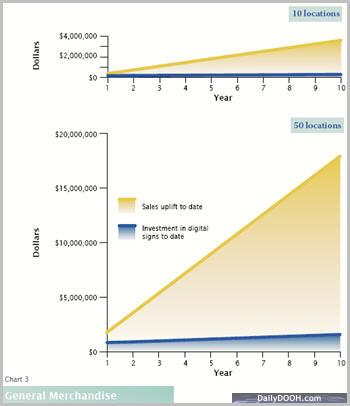 These folks had to correct this report and issue an updated version after some criticism from early readers, but hats-off to them for acknowledging that (we think they totally under-called one of the costs involved in building a network), and then addressing it and issuing a new version (so quickly too).

Bobby Renaud, Director of Operations at NetWorld Alliance wrote in an email to those who had purchased the report “After input from some readers, we have included additional information about the cost of content production for digital signage deployments, because that cost is such a potentially significant factor”

The SPECIAL REPORT written and edited by James Bickers and published jointly by the Digital Signage Association and NetWorld Alliance only costs USD 49 but what do you get for your money?

It’s clear that digital signage has a positive impact on retail sales — but just how much of one is a matter of debate. Numerous studies have been commissioned and published, trying to determine the net effect dynamic signage will have on the average store’s sales.

In this report, we aim to provide a thumbnail estimate of that break-even point, for various types of retail. To do this, we created a fictional shopping center retailer, complete with a screen layout floor plan. We took that floor plan to 10 leading digital signage providers and had them price out a signage program. We averaged those numbers together, and then compared them to an average of the sales uplift figures and the ultimate impact on revenue.

You’ll see the assumptions we used, the prices we received and the results that follow when they’re all put together.

We thought the report was too brief – 17 pages in total AND that includes the cover and the obligatory 2 pages at the back with DSA and NetWorld Alliance logos!

However even though the report had to be corrected you can see that it has been well researched, well thought out and well laid out.

The primary audience of the report might well be retailers themselves – especially those who may be looking to ‘dip a toe into the water’ or those who already have and are looking for a way to measure / re-assure themselves about ROI.

From that perspective the report does its job and we would recommend it.

You can purchase the report from here…

Digital Signage vendors working in this space should buy a dozen copies and distribute to all their staff, especially their sales people and most importantly to their retail customers!

The graphs in the report are great and I am sure that many suppliers would want to include them in their own sales presentations when talking to prospective customers.

This entry was posted on Saturday, May 17th, 2008 at 08:02 @376 and is filed under DailyDOOH Update. You can follow any responses to this entry through the RSS 2.0 feed. You can leave a response, or trackback from your own site.