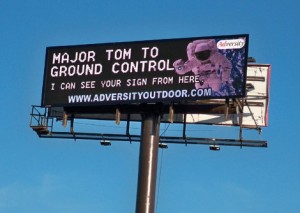 More than two years ago co-owners Dan Gowdown and Hank Hanna, who also own and operate Daniel Island Rentals, saw billboard revenue potential in a piece of property for sale along the expressway in Daniel Island.

No outdoor billboards stood within miles of the lot, plus approximately 70,000 vehicles pass directly by the location each day. Once they landed the property, Gowdown and Hanna began their efforts to obtain a digital billboard sign permit with Berkeley County.

A legal battle lasting nearly two years finally prevailed in favor of Adversity Outdoor this past September, and with the help of Daktronics, a digital billboard was installed.

Dan Gowdown told us “I think our thought process is that you have all these outdoor companies out there who are trying to go digital—unfortunately there are plenty of municipalities and governments pitted against them for the wrong reasons,”

Both Gowdown and Hanna were adamant in the reassurance they received from Daktronics not only in the quality of product they sell but also in the fact that the company has staff located extremely close to the billboard—a Daktronics representative lives within minutes of the billboard.

“Should we ever encounter a problem we know Daktronics is close by. The company, and their sales and service people in general, really have gone the extra mile for us,” said Gowdown.

Gowdown and Hanna aren’t your typical outdoor advertisers. Both are in their early 30s, operate a very substantial real estate business in the Charleston area, and have optimistic outlooks when it comes to digital billboard advertising.

When asked why Adversity went with Daktronics as opposed to other manufacturers, co-owners Gowdown and Hanna summed it up to the passion they received from Daktronics.

“We really felt the enthusiasm was better. Daktronics was a good fit based on them being able to accommodate to our needs and energy levels,” said Gowdown.

Hanna agreed and said “Daktronics has a reputation in this digital industry for being the best at what they do, who are we to disagree?”

This entry was posted on Wednesday, November 11th, 2009 at 10:06 @462 and is filed under DailyDOOH Update. You can follow any responses to this entry through the RSS 2.0 feed. You can leave a response, or trackback from your own site.