EnQii’s CEO, Ajay Chowdhury has been getting mentions in the UK mainstream press these past few weeks, with mentions on Tuesday in the UK’s Daily Mail newspaper and the Wednesday before that in London’s Evening Standard complete with photograph! 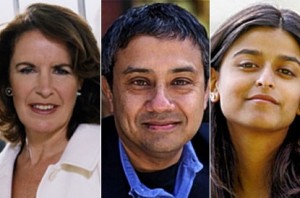 As well as being CEO, EnQii Group, Ajay is a director of the Arts Council London and the British Screen Advisory Council – Ajay is also the train driver in Postman Pat but I guess that might be a different one?, Ed

Those who know him, will understand that he is perfect in these sorts of roles and will also know that one of his loves in life is the arts and theatre (in his spare time Ajay is also Artistic Director) of a theatre and Film company called Rented Space.

Anyway, seems that he has been caught up in the middle of a small political falling out over who should be chair of the London Arts Council.

As the Daily Mail pointed out rather rudely we thought…

Ajay is in charge in the interim we guess until (someone) can choose between the lovely ladies to the right and left of him in the picture above.

The London Evening Standard’s coverage was the best and doesn’t care or point out its opinions on why Ajay (they call him Mr Chowdhury which we liked) is sitting in the hot seat for a while, they simply described him as “Mr Chowdhury, the chief executive of EnQii, a global digital media company, and founder of the Rented Spaces Theatre Company”

It’s not quite what we had in mind when we called a few weeks ago for the various association to do more to get the top industry execs in the mainstream press but it’s all quite harmless and a bit of fun for those of us watching for the outside.

Mr Chowdhury (we are going to call him that from now on) will like always do a fantastic job.

This entry was posted on Friday, November 13th, 2009 at 12:50 @577 and is filed under DailyDOOH Update. You can follow any responses to this entry through the RSS 2.0 feed. You can leave a response, or trackback from your own site.