London Gets Another Giant Digital Screen 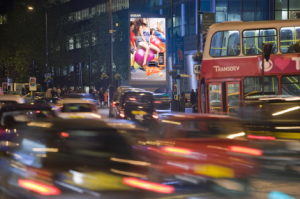 It will, we are told, create a premium showcase for brands to engage with thousands of daily commuters both heading out of the capital to the A4/M4 and travelling into central London by vehicle, as well as large volumes of pedestrians using public transport.

It is of course the second digital screen announcement in less than a week from Ocean Outdoor, see our story on their ‘Silver Screen’ alongside the M4 motorway heading out to London, Heathrow.

The press release says that “this imposing showcase employs the latest full colour, static LED technology” Lighthouse declined to comment when we questioned them about their involvement with Silver Screen so didn’t even bother asking this time round but we guess this is another Lighthouse deployment using Scala (see our story about Scala displacing AMX / Inspried Signage at Ocean Outdoor).

Ocean Outdoor’s CEO Damian Cox told us “Our latest digital tower will provide advertisers with a unique, high quality out of home site, at one of West London’s busiest commuter hubs”

He added “We are fully committed to evolving the outdoor market through the creation of exclusive outdoor locations like P10 – Hammersmith Broadway that deliver impactful and dynamic outdoor space for brand campaigns.”

Ocean has worked directly with Hammersmith and Fulham council to acquire and develop this prominent site, bringing significant additional revenue into the borough.

Ocean Outdoor has a rapidly expanding portfolio which includes some of the UK’s most unique outdoor advertising positions, including the iMAX at Waterloo, and Europe’s largest digital media wall, located near Liverpool Lime Street station.

This entry was posted on Tuesday, November 17th, 2009 at 18:37 @817 and is filed under DailyDOOH Update. You can follow any responses to this entry through the RSS 2.0 feed. You can leave a response, or trackback from your own site.