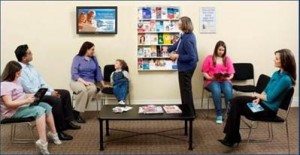 “The new agreements double the number of screens to more than 5,000 within the 10 digital out-of-home networks under the AHMN, reaching over 10 million health-conscious viewers monthly,” says Paul Jankauskas, president of AHMN, who founded the company in late 2008.

“The interaction and engagement varies from venue to venue as does the programming loop and content,” says Jankauskas. “Most screens vary between 32” to 40” and most of the 10 networks in the group create or aggregate content that is of specific interest to the various doctors’ practices, so the messages in a pediatrician’s office would be different than those in the office of a cardiologist or a neurologist.

“And depending on the parameters of the media buy, the client may by the entire network, targeted specialties, or a targeted geography.”

Each member controls the programming of that individual network. The average wait time in a medial office is about 30-40 minutes so the programming is generally a one to two hour loop with an ad campaign that runs a minimum of twice per hour to be sure to make an impression.

On average, there is a 75% content-25% advertising split on the screens, although those in hospitals are used more for internal notices. Content is devoted to health items and healthy living information. Advertisers are a mix of pharmaceuticals, OTC products such as pain relief products, and packaged goods.

The 10 different networks vary slightly both in content type and programming. Some are full screens; some have a 3 panel layout to allow different windows for different uses. The programming is updated monthly with new relevant stories. Those screens that also provide weather or news are updated daily as needed. And a percentage of time on most networks is reserved for the hospitals’ or medical practices’ own messages.

“The ability to AHMN to gather all these disparate networks together as one offering is a large part of the value we bring to the equation,” says Jankauskas, who spent the previous six years as head of sales and marketing with Captivate Network before founding AHMN. “We allow brands and agencies to ‘shop’ all 10 targeted networks at one time.

“The continued growth of AHMN is yet another positive step in consolidating the marketplace and further streamlines the buying process. We provide a single point of entry for brands and media buyers to access these valuable medical networks.”

“The other benefit to our affiliate approach is the level of cooperation between the AHMN affiliates. They have been able to share ideas and best practices. Even though they are all competitors of sorts, they also realize there is strength in numbers and know that the market is big enough to support them all. Most of the individual affiliates are still fairly young and growing and as such do not yet represent a national footprint. AHMN combines them into a national platform. In this DOOH advertising supported space, size really does matter.”

Jankauskas says that there are about 35 companies other companies in similar business across the U.S. and AHMN has its eye on at least 10 of them to add to the company. AHMN handles all sales and advertising for networks under its umbrella.

“DOOH‘s greatest strength lies in its ability to deliver a qualified audience in a uniquely measurable and highly targeted environment at a time when the messaging is most welcome,” says Jankauskas. “The healthcare environment remains one of the most valuable DOOH venues.”

This entry was posted on Tuesday, November 24th, 2009 at 11:00 @500 and is filed under DailyDOOH Update. You can follow any responses to this entry through the RSS 2.0 feed. You can leave a response, or trackback from your own site.