It wasn’t really that difficult for Christie Digital [1] to develop the name or its brand positioning for MicroTiles [2] BUT it took almost two years for the company to decide it had the right name from the very beginning. 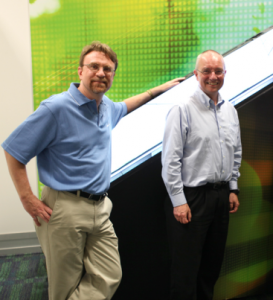 “While we were searching for a different name, we continued to use ‘MicroTiles’ throughout the research and development phase of the product, and also when we conducted early private technology demos. The product name resonated well during our private demos, so we knew we had the right name.”

In fact, Christie showed the product to approximately 1,000 people in special ‘whisper suites’ during the final development phase of the product, and management was pleasantly surprised that there was almost complete approval of the name and positioning of the brand.

“The product is micro in context,” says Cress. “When Bob and Mike were discussing the concept of a new display technology, they wanted to create something smaller than the typical size of other tiled display products. An individual traditional tiled display unit can weigh as much as 280 lbs and be as large as 80″ or more on the diagonal. An individual Christie MicroTile weighs in at 20 lbs with a 20″ diagonal, so we saw it as being ‘micro’ in comparison. Our use of the word ‘micro’ is relative to the other products in the commercial visual display world.”

“It’s a normal reaction that people have their own opinions on a name, but once they see the product and know what’s behind it, they understand,” says Denys Lavigne, president, Arsenal Média [3], Montreal, and lead creative on the product.

It’s not that other names weren’t considered. Some 300 were in total, and all were gradually discarded.

“We began our naming project with our engineering team, because our engineers are both logical and creative and we wanted that balance in an otherwise very subjective exercise,” says Cress.

“We also worked with Arsenal Media and with Milestone Integrated [4], our advertising agency in Cambridge, Ont., to develop a list of candidate names.

“We considered a lot of names but rejected them all because we felt that the use of unassociated names has become tired and dated. We also explored art and visual-related names and rejected many of those because they implied static images. We also thought it would be interesting to test some Japanese names, given that the product was conceived in a hotel bar in Toyko (and our parent company is Japanese) but decided to stay with a name that defined a characteristic of the product.”

In addition, legal issues and translation issues came into play. With the product to be rolled out globally over the next few months, Christie needed a word that would make sense to the English-speaking world, but that would be easily translated and understood in many languages.

“This is a product that is very high tech and spectacular, and once people see the black boxes come to light, it’s impressive and impactful,” says Lavigne. “It’s a name that they’ll remember.”

But branding is more than just a name. It has to stand for something – a word that can stand the test of time and can be associated with a meaning – Christie’s MicroTiles brand we are told can be condensed into one word ‘Freedom’.

“And freedom for the creative,” says Lavigne.

Other agencies who contributed to the creative for the launch product included Amigo Digital [5] (London), Dagobert [6] (Paris) and Show+Tell [7], (New York).

“It gives freedom to be able to create content in smart ways; to fit creative to different shapes; to work differently.”

Cress also says that, with the colour reproduction capability of MicroTiles, brands have freedom to retain the integrity of their brand identity, architects have the freedom to install the product in tight spaces, and with LED as the light source, there’s freedom from replacing consumables.

“When we realized that this would be an opportunity to market our product to brands, to retail and to architects, that’s when the excitement and passion for the project fully kicked in and when we engaged in establishing a brand strategy that would carry us into these new verticals,” says Cress.

That included developing a specific logo to illustrate and stand for the brand, something recognizable that could be used in all marketing materials, brochures, on stationery, even on business cards.

The logo developed to incorporate the brand has three important elements:

Christie is expecting that MicroTiles will be recognized  as a brand globally in a period of 12-to-18 months.

It was first launched in November in North America and will be publicly showcased for the first time in Europe at ISE 2010 in Amsterdam in early February and in Asia later in the spring.

“As we roll out the product in each region, our marketing materials will be localized in multiple languages,” says Cress.

“While we have planned to establish brand awareness and recognition in predominantly English-speaking markets in less than 12 months, it’s presumptuous to assume that it will occur globally in less than 12-18 months.”

Christie MicroTiles is great for any brand that wants to make a digital impact, says Lavigne “The timing for its launch is great because the industry is at a level of maturity,” he says.

“Digital screens are part of our world. People understand how to integrate them and advertisers see how they can show their brands in different, captivating ways.”

The product already has several preorders in a sports locale, in retail, and for a broadcast entity.