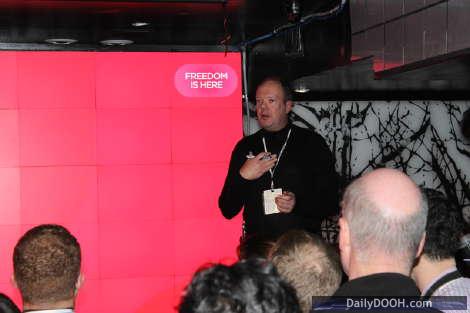 Adrian did a great job as Master of Ceremonies and has probably never presented on such a large screen (shown here in part as the red background). The ‘FREEDOM IS HERE’ text is actually a button which progresses to the next slide sequence!

Not Microsoft’s Powerpoint and not Apple’s Keynote but all built bespoke by Arsenal Media [1] using Float4 Interactive. Very impressive.

2 Comments To "How To Judge A Man By His Shoes"

The ’tiles are great technology but am I the only one to think that the seams/joins between the tiles look rather noticable (reminds me a little of itrans joins) and at times slightly uneven in their line up? We’re only talking mm’s here, but it to quote Jack Bruce, it does give the picture a slight moustache.

Come on, he ALWAYS wears turtle necks! so the phrase “chose his clothes well” exaggerates!