AddMirror, a mirror with ‘digital guts’ according to Elliott Atkins, president of Oakville, Ont.-based AddMirror Canada, has launched in Canada – but with a difference from AddMirror products in the U.K. and other European countries. 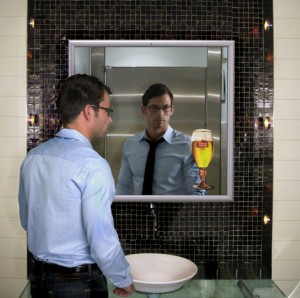 which show ads as people look into the mirror, are equipped with motion sensors which trigger the ads, customer software, and LED lighting that shows ads brighter and crisper.

“The mirror itself isn’t a digital screen, but it’s all computer controlled,” says Atkins, who has the Canadian rights for AddMirror. (AddMirror has been in Europe since 2004).

At launch, AddMirror Canada is installing AddMirrors in the washrooms of between 50 and 60 better restaurants and lounges in Toronto, and another 15-to-20 locations each in Montreal and Vancouver. There is only one AddMirror per washroom, and only one ad during a contract period – typically a four-week cycle.

First advertiser booked on the Canadian AddMirrors was Absolut vodka.

This entry was posted on Thursday, January 14th, 2010 at 00:01 @042 and is filed under DailyDOOH Update. You can follow any responses to this entry through the RSS 2.0 feed. You can leave a response, or trackback from your own site.

2 Responses to “AddMirror Launches in Canada”