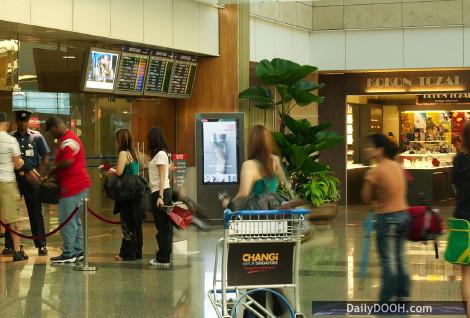 We like what we are hearing from EYE as it welcomes ‘first timer global brands’ to its digital network.

Elizabeth Arden is one brand we would all have heard, whereas the hospitality chain Meritus Hotel and financial organisation United Overseas Bank (UOB) are more likely better known in APAC or the Southern Hemisphere (though that doesn’t detract from the brand).

Mr. Raju Bhakta, General Manager of Eye Singapore told us “Elizabeth Arden, Meritus Hotel and UOB’s campaigns reach more than three million holiday-makers and the Great Singapore Sale visitors during the June peak season at Singapore Changi Airport. Their use of our digital media offerings is a vote of confidence in EYE’s digital Out-of-Home formats. This also reinforces EYE as a leader in digital Out-of-Home advertising”

Take note on how EYE sell and schedule their digital portfolio – a maximum of three advertisers
and seven-second animated creative executions – we will be writing more about EYE’s philosophy on this later this week or early next!!

This entry was posted on Tuesday, July 1st, 2008 at 00:40 @069 and is filed under Scuttlebut. You can follow any responses to this entry through the RSS 2.0 feed. You can leave a response, or trackback from your own site.