Limited Space [1], an out-of-home media owner in the premium shopping mall market, is taking ownership and wrapping the entire frame of its Ad HD network – giant screens of up to 110 sq/ft with full audio – to help promote the new BMW 5 series. 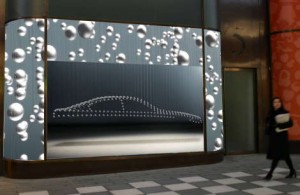 [2]The campaign, in conjunction with Posterscope and Vizeum, runs from this week for three weeks, and will include flagship malls Cabot Circus and Liverpool ONE.

The screens will play a key part in the large multimedia launch campaign which focuses on audio visual, impactful and premium media to highlight the aesthetics of the new car. Because of the AV focus BMW wanted the outdoor campaign to centre on large digital screens.

Shopping malls were not an obvious location for BMW ads as its target audience is affluent men but Posterscope were keen to explore the opportunities in this high dwell time environment and asked Limited Space to look into suitable sites. Limited Space recommended premium malls in their network with the highest overall footfalls and concentration of AB men to make sure the ads were as targeted as possible.

Abigail Humphrey, senior account manager, Posterscope told us “Limited Space knows the mall environment inside out and could give us the insight and figures we needed to take to the client to back up the decision to use these locations. It’s always great working with them as they have the expertise and innovative formats to help make targeted campaigns highly relevant.”

Founded in 2002 by Matt Gordon and Samantha Sida, Limited Space has quickly grown into an established national media player in the out-of-home market. It offers a range of high-impact, premium advertising formats in over 75 of the UK’s most prestigious locations – including The Metro Centre, The Bullring, Cabot Circus, Highcross and Bluewater – to deliver footfalls of over 40 million shoppers a month.

Adlift was launched in 2006 and has led the way for other successful product launches including Panoramics and its first digital offering, Ad HD.

Limited Space has partnered with some of the top creative and media agencies and prestigious brands -including 20th Century Fox, Proctor & Gamble and Sony Ericsson – to help deliver innovative, targeted and highly creative advertising campaigns with some of the longest consumer ‘dwell’ times and unprompted recall figures in the industry.