This installation combines a traditional building wrap with live Twitter content processed via BroadSign [2] software and projected from the curb-side below.

People can send real-time well wishes to the Canadian Athletes through www.twitter.com/GMCheers [3] to be displayed on the projection as well as various e-media properties. 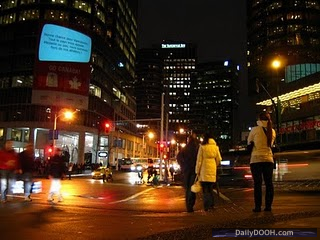 [4]The Media Merchants provided the display technology, installation, distribution of media assets, and real estate acquisition for the projection.

[5]Media Merchants abandoned the traditional OOH media and pitched a daring night-time projection campaign to BMW Canada’s MINI Cooper ream – MINI bought in and Brad and Brodie took out a loan to buy their first projector and pressed the power button on a new business model!

They no longer worry about parking tickets for crew vehicles parked on-site through the night and even look good naked [6] while on the job!

Dmitry Sokolov is a new guest contributor to DailyDOOH. He is a Digital Signage Evangelist and a Samsung Market Development Manager at Ingram Micro Canada. Look forward to more content by Dmitry on Canadian Digital Signage landscape and first-hand experiences as a Digital Signage professional in the Canadian IT Channel. Dmitry can be reached at write@dsokolov.ca [7] or on Twitter at http://twitter.com/Dmitry_Sokolov [8]