Loads of familiar faces at the Las Vegas Convention Centre on the day before #dse2010 proper starts AND interestingly quite an international flavour to the mix of people also. 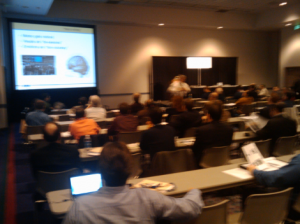 We sat down with Bernhard Baer and Thomas Doktor from Germany in a break during the DOOH Advertising Summit.

Lyle Bunn was there, he was doing what looked like a very well attended SPEED training session – we counted 80+ folks in his room.

Ron Gorrie and several of his Adcentricity people were there, two new folks from DOmedia that we hadn’t met before and an interesting 1,000+ screen network in Kenya also.

We also met folks from PRN, Nielsen and from Lamar and even had a chance to have a quick chat with E.G. (John) Johnson, the new interim executive director of the Digital Signage Federation.

Bill Collins of course, Bob Martin from RMG (nee Danoo) and many others.

This entry was posted on Wednesday, February 24th, 2010 at 00:16 @053 and is filed under DailyDOOH Update. You can follow any responses to this entry through the RSS 2.0 feed. You can leave a response, or trackback from your own site.