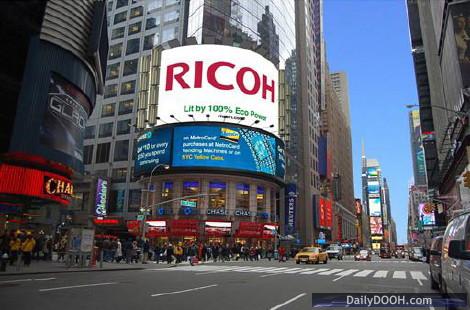 Engadget, Yahoo and Digital Signage News all picked up on this but it got scant mention in Europe which is a shame AND it is interesting now that we have also seen a couple of carbon neutral and green lobby stories.

Tokyo, July 2, 2008 – Ricoh Company, Ltd. (Shiro Kondo, President and CEO ) announced today that it will erect a sign in New York City that will be 100 percent eco-powered, the first such sign in New York. The electricity for the billboard will be produced entirely by solar and wind power and stored in batteries. No electricity will be purchased from local power companies.

Four wind turbines and 45 solar panels will produce an average of 98 kwh of electricity per day. To put the savings into perspective: the same amount of electricity required by an ordinary sign would result in as much as 18 tons of C02 per year. The batteries can hold four days worth of supply. However if there is insufficient wind or solar power, the sign may not light up; that is an eventuality Ricoh readily accepts.

The sign will light up for the first time in early December. This is our second eco-signage project, the first one dates back to April 2003 in Osaka, Japan.

Details of the signage:

This entry was posted on Thursday, July 17th, 2008 at 00:46 @074 and is filed under DailyDOOH Update. You can follow any responses to this entry through the RSS 2.0 feed. You can leave a response, or trackback from your own site.

One Response to “Solar Panelled Billboards”