The Digital Signage Federation was officially launched this morning during a sparcely attended press conference during which the the digital signage industry’s new trade association announced the appointment of an interim Board of Directors. 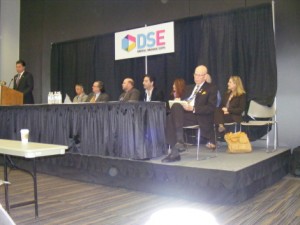 Angelo Varrone, CEO, Exponation LLC, which produces the DSE, did a short, crisp job of announcing the interim Board of Directors and the members of same who were present. The Interim Board, comprised of professionals in end-user, consulting, network and vendor segments of the digital signage industry “have embraced the challenge of founding and overseeing the initial development of this new organization.”

The members will also oversee the formal Board election process and expects to have their member-elected Board in place within approximately 90 days.

“Alan Brawn, principal of Brawn Consulting was so enthusiastic about a truly impartial and unified industry voice that he initiated contact with DSF,” says Geri Wolff, communications representative for the Digital Signage Expo, about the first member outside of the interim Board to join,

The new organization claims to be totally independent and will develop its own code of ethics and bylaws. It hasn’t any budget at the moment, but DSE will be providing seed money on an annual basis to get the group rolling – there’s a no fee for membership for the first six months – and the seed money will go towards being the official trade show of the DSF.

“Main goals of the DSF will be up to the members themselves to decide,” says Varrone. “They should be directed by the membership.”

Asked if people who did not approve of the new organization would boycott the show next year, Varrone said, “If it means lower attendance, so be it. But we are seeing a lot of membership enthusiasm.”

Nurlan Urazbaev, director of marketing, Broadsign International, says that Broadsign joined because the company liked the idea of the pitch that the DSF would be totally independent.

“We don’t go by the organization,” says Urazbaev. “We go by the people whom we trust, that we know, and that have done good things in the past.”

Laura Davis-Taylor, vice-president, Global Retail Strategy, Creative Realities Inc., says that CRI joined because ”I’ve always felt that we should help the industry. We’ve worked with these people and we feel that they’re help the industry, too.”

This entry was posted on Wednesday, February 24th, 2010 at 19:06 @838 and is filed under DailyDOOH Update. You can follow any responses to this entry through the RSS 2.0 feed. You can leave a response, or trackback from your own site.