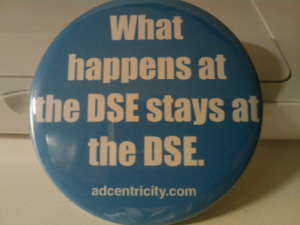 Ever the eternal optimist, Rob Gorrie from Adcentricity kindly gave me this badge (shown to the right here) which I was ordered to wear at all times which said “What Happens At DSE Stays At DSE” – umm … of course it does 😉

And we will leave you with a quote from Sir WInston Churchill “There are a terrible lot of lies going about the world, and the worst of it is that half of them are true”

This entry was posted on Monday, March 1st, 2010 at 11:44 @531 and is filed under DailyDOOH Update. You can follow any responses to this entry through the RSS 2.0 feed. You can leave a response, or trackback from your own site.