The mainstream press do seem to love the ‘billboard is watching you’ story and try (as an industry) as we might it seemingly won’t go away. 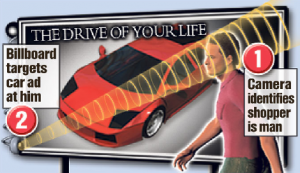 Page 28 of today’s Sun Newspaper in the UK has a story entitled ‘Buy-Tech’ Billboard Watches You Shop and goes on to quote the usual (and now extremely boring) Minority Report reference.

Sex? Need we remind UK male readers that there are a pair of very nice tits on display on Page 3 of same UK Newspaper every day.

Digital advertising expert Omaid Hiwaizi, 40, from London agency Chemistry – who the hell is he, Ed is at least quoted as saying “Although it may seem scary, it’s no more sinister than retailers using cookies online to see what items you’ve looked at on their websites”.

We’ve already reached out to the journalist who wrote the article and pointed her in the direction of Chairman, POPAIdigital and President OVAB Europe who could probably provide better quotes and more relevance going forward in the future.

It’s also worth mentioning here of course POPAI’s (Privacy) Code Of Conduct published in the US back in February.

This entry was posted on Wednesday, March 10th, 2010 at 12:56 @581 and is filed under DailyDOOH Update. You can follow any responses to this entry through the RSS 2.0 feed. You can leave a response, or trackback from your own site.

One Response to “‘Buy-Tech’ … Sign IDs Sex To Target Ads”