Nice guys as salesmen, whatever next? Christie Digital has just announced a couple of changes within its sales structure to ensure that its recently released MicroTiles product area is given the appropriate, impactful focus. 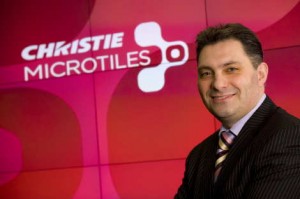 Joe has been close to the launch preparations for MicroTiles for some time and we had the privilege of working with him on the ‘whisper suites’ back in 2009. Joe helped prepare the EMEA market prior to the recent ISE2010 launch.

In his new role he will be product champion; basically enabling him to support the regional sales team across EMEA as well as find and close business directly.

Joe told us he was thrilled with his new role and said “What an amazing opportunity to be involved with such a unique product as MicroTiles”.

Christie EMEA Vice President, Dale Miller told us “Since joining Christie in 2007, Joe has reshaped the UK AV channel and grown our business considerably. I am confident he will bring focus and determination to his new role and ensure MicroTiles is a major success for Christie in EMEA”

Christie also welcomes James Belso to its sales team. James takes over the role of UK channels sales manager and brings a wealth of AV sales experience to his new role, having worked with channels, consultants and direct end users, most recently at Pendax UK Ltd and Panasonic.

This entry was posted on Wednesday, March 10th, 2010 at 16:00 @708 and is filed under Scuttlebut. You can follow any responses to this entry through the RSS 2.0 feed. You can leave a response, or trackback from your own site.

One Response to “Let Us Introduce Mr. Joe Graziano”