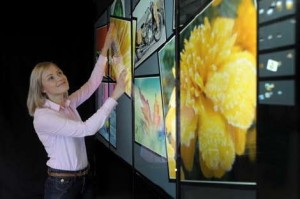 The company, based in Helsinki, Finland, will initially operate its North American operations from offices in New York City and San Jose, California.

We haven’t seen a MultiTouch display as yet; we didn’t get to CES 2010 where they displayed the first native Windows 7 multitouch applications for its MultiTouch Cell displays and their next demos are today and tomorrow (Wednesday, March 10th and Thursday, March 11th, from 8:00 am to 6:00 pm) at the Roosevelt Hotel in New York City, at 45 E. 45th Street in the Lexington Suite.

On show will be the company’s MultiTouch Cell table, as well as an eight-foot-wide multitouch wall that connects four LCD-based Full HD Cells – oh and the MultiTouch Cornerstone SDK for multi-platform support, including Windows, Mac, and Linux.

We are told that the MultiTouch Cell displays enable multiple users to manipulate images on the displays – whether playing games, resizing maps, pictures, or videos – by tracking the actual fingers and hands, for richer interaction.

The modular MultiTouch displays can be configured as stand-alone 32-inch or 46-inch units, or can be stacked for large-scale commercial/industrial displays.

The company’s patented high-performance system tracks an unlimited number of hands on the screens at 120 frames per second, in bright daylight and dark environments. The MultiTouch Cell is a modular and stackable LCD cell with built-in multiuser and multitouch capabilities with full HD 1920×1080 pixel resolution.

Timo Korpela, general manager of North America for MultiTouch Ltd. told us “The collaborative display market is about to explode, as people learn how to use multitouch smartphone and PC kiosk applications and integrate them into real-time collaborative use. Our software and hardware designs can be customized for elaborate networked applications that take full advantage of existing operating systems and applications”

He added “We anticipate that the digital signage and corporate display markets will move toward greater use of multitouch display systems, and we want to shape the way users interact with information displays.”

MultiTouch is a leading developer of interactive display systems, based on proprietary software and hardware designs. The company is headquartered in Helsinki, Finland, and its systems are currently in use in more than 27 countries around the globe.