It’s not just us that recognises EnQii as a market leader as this week Lead411 announced its ‘New York City Hot 125’ recognising the hottest technology companies in New York City. 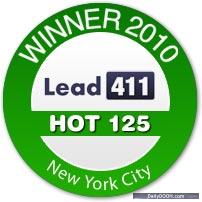 Congratulations must go to both EnQii and YCD Multimedia who were both in the list.

This information has given insight to which are the fastest growing companies in U.S and their ‘Hot List’ awards have been created to recognise these fast growing companies – this particular list was originally started with over 750 companies and was narrowed down to the top 125.

Tom Blue, CEO of Lead41 told us “We are very proud of these awards. We have been tracking fast-moving companies for our customers for the past 10 years and we felt it was important to recognize these growing brands publicly.”

First, all companies must by in either the Software, Wireless, Internet, or Media industry, have less than $100M in yearly revenues, and be within the New York City metropolitan area. From there, each company must meet one or more of the following requirements;

The entire list including more details about the award and winners can be found at http://www.lead411.com/

Lead411 provides information, news, and research about U.S. companies and their executives. Founded in 2001, its goal has been to focus on quality corporate data that is valid and useful rather than producing as many company records as possible. In addition, Lead411 tracks company news in order to alert its customers about venture financing, new hires, hiring plans, etc. Customers include Gartner, Administaff and ADP.

This entry was posted on Wednesday, March 24th, 2010 at 21:22 @932 and is filed under Scuttlebut. You can follow any responses to this entry through the RSS 2.0 feed. You can leave a response, or trackback from your own site.