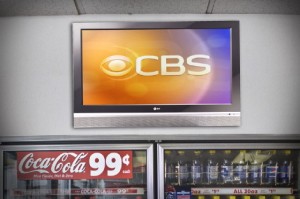 It is so NOT TV (even more so in Retail) and we wonder when networks will finally realise that branding them as such does them more harm than good, anyway interesting to see here that Destination Media [2] – better known of course for their Gas Station TV network [3] – has now launched a convenience store offering.

We are told that the C-Store Network [4] has now launched in Boston, New York, and Los Angeles with 100 new locations and following the launch, the network will expand into other markets such as Orlando, Phoenix, and Seattle.

C-Store TV has started off by offering programming from sister network Gas Station TV though it will soon feature its own unique content experiences.

The C-Store TV screens are tiny – 32″ to 37” LCD screens by LG Electronics though the plan of course it to locate these in key high traffic areas such as near check-out and above beverage coolers and coffee stations.

David Leider, CEO of Destination Media was quoted as saying “Similar to our rapid roll out of Gas Station TV onto more than 5,500 screens in two years, C-Store TV will expand to reach between 8 and 10 million impressions per month by the fourth quarter of this year. Our at-the-pump network is proven to provide measurable sales lifts in convenience stores. The launch of C-Store TV is a direct result of the demand we are experiencing from convenience store retailers and major brand marketers to reach beyond the pump and provide access to the in-store point-of-purchase environment.”