Pizza Hut today announced that it has created a 12-month media holding on atmAd [1] digital out-of-home screens. The restaurant chain is working with atmAd to drive restaurant footfall by specifically targeting consumers using the cash machine during the last week of each month, coinciding with pay day. 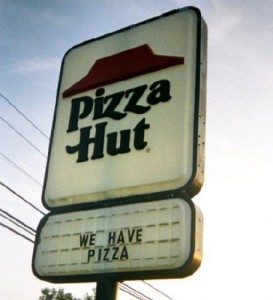 Each week-long burst will aim to deliver over 750,000 impacts a month over the next 12 months, driving awareness of value offers amongst an audience who have money to spend on eating out.

Justin Stark, National Sales Director at atmAd told us “To use digital out of home effectively, it’s vital that brands deliver a contextually relevant message to their target audience. This is an example of a brand that really is thinking creatively and strategically about how to reach its target audience. By working with us to secure a month-end spot Starcom has enabled Pizza Hut to intelligently target its audience at both the right time and in the right place.”

Clare Watson, Brand Communications Manager, Pizza Hut UK said “The combination of geographically-targeted atmAd and the month-end campaign burst provides us with a powerful way to maximise the effectiveness of our customer communication, reaching people at an appropriate moment when money is in the bank.”

The new agreement follows the successful promotion of Pizza Hut’s £4 Happy Hour deal across atmAd’s national network in 2009, research for which proved that atmAd was effective at reaching Pizza Hut’s target audience of families and young adults and that as a result of seeing the ad, consumers would be more likely to visit in the near future.

This is good. The more big players that come on board with digital signage the better thinbgs will get and the easier it will be to get others to follow the digital signage revolution coming soon.!!!!!!!